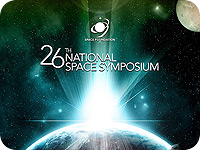 There is already a buzz in the air about the 26th National Space Symposium. Scheduled for April 12-15 at The Broadmoor Hotel in Colorado Springs, Colo., the 2010 event may just be the biggest and best ever held.

The Exhibit Center – always a mind-boggling array of the latest space technology – is sold out and a number of key sponsorships have been snapped up. Plus, companies and individuals are already planning who will attend, what business they’ll conduct, and how they will maximize this opportunity to hear from and network with the space community’s most influential leaders.

The list of top-level speakers and panelists, even at this early date, is impressive:

As the list grows, new speakers will be added to the 26th National Space Symposium website (see speakers at http://www.nationalspacesymposium.org/speakers). For full Symposium details, click here.