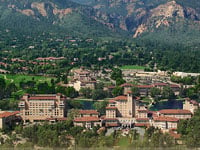 COLORADO SPRINGS, Colo. (Nov. 12, 2009) — One of the most exciting reasons to attend the 26th National Space Symposium is the extraordinary setting at The Broadmoor Hotel, in Colorado Springs, Colo. Scheduled for April 12-15, the 26th National Space Symposium combines networking opportunities with the space community’s most influential leaders at one of the nation’s most spectacular venues. Forbes Travel Guide Five Star Awards (formerly Mobil Five-Star Award by Mobil Travel Guide) announced its list of Five Star winners for 2010 and honored The Broadmoor for a record 50th consecutive year. The Broadmoor is the only property to ever achieve this status. Additionally, the historic resort has the distinction in 2010 of becoming a triple Five Star winner with the addition of both the Penrose Room restaurant and The Spa at Broadmoor.

With a history extending to 1891, The Broadmoor was built by entrepreneur Spencer Penrose to rival Europe’s finest hotels, and its grounds include a museum of vintage carriages and automobiles.

“The Space Foundation congratulates The Broadmoor and its staff for this well-deserved recognition,” said Space Foundation CEO Elliot Pulham. “The beauty, elegance, and history of the setting create a fascinating backdrop for discussing global space endeavors. This is just one of the reasons there’s no other event like the National Space Symposium anywhere in the world.”

The Space Foundation Discovery Institute provides space- and aerospace-themed professional development, training, and support for teachers and students from around the world and serves as the base location for the Space Foundation’s education programs for teachers and students. It houses classrooms, a NASA Educator Resource Center, and eventually will include three major laboratories: a simulated space mission operations center to open in early 2010; a simulated Martian terrain laboratory to open in early 2011; and a Science On a Sphere facility in early 2012.

Plans are well under way for the 26th National Space Symposium. The Exhibit Center, sponsored by AMERICOM Government Services (AGS), is already sold out and a number of key sponsorships have been taken. In addition to AGS, major co-sponsors include Northrop Grumman for the spectacular Opening Ceremony and Boeing for the Corporate Sponsorship Dinner. Other Symposium co-sponsors to date are ATK, Cisco Systems, Inc., GMV, International Space University, Pratt & Whitney Rocketdyne, Raytheon, SAIC, and United Space Alliance.

Watch for program updates and registration information at www.nationalspacesymposium.org/.