Dr. William Ballhaus, Jr., Elected Chairman of the Space Foundation Board of Directors 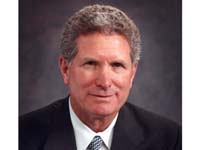 COLORADO SPRINGS, Colo. (Jan. 20, 2010) — Several significant changes were made to the Space Foundation’s Board of Directors at the organization’s annual meeting today in Washington, D.C.:

In addition, the following Board members are continuing their terms:

Marc L. Holtzman, former president of the University of Denver, has retired from the Board after serving for six years.

“The Space Foundation is fortunate to have a Board with such depth and breadth of experience as policy-makers, industry and military leaders, financial experts, astronauts, and educators,” said Space Foundation Chief Executive Officer Elliot Pulham. “We’re grateful for the many, many contributions Gen. Moorman has made as chairman and look forward to continuing to work with Dr. Ballhaus in his new role as chairman. We also thank Marc Holtzman for his many years of service to the Board.”