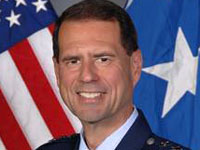 Sheridan is confirmed to speak on Thursday, April 15, the last day of the Symposium, which runs April 12-15 at The Broadmoor Hotel.

About Sheridan
As commander of the Space and Missile Systems Center, Sheridan is responsible for managing research, design, development, acquisition, and sustainment of space and missile systems, launch, command and control, and operational satellite systems. Responsible for more than 6,000 employees nationwide and an annual total budget in excess of $10 billion, he is based at Los Angeles Air Force Base, Calif.

Sheridan’s experience includes acquisition leadership of aircraft, simulator and classified space programs; requirements development across all Air Force space programs; and operational leadership in four different national space programs. He has served as military assistant to the assistant secretary of the Air Force for space, commandant of Air Command and Staff College, director of requirements at Headquarters Air Force Space Command, and most recently as the deputy director of the National Reconnaissance Office.

Sheridan has a Bachelor of Science degree in mechanical engineering from the University of Connecticut, and a Master of Business Administration degree from Bryant College in Rhode Island.

« 26th National Space Symposium Looks at What's Up There