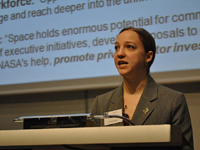 John’s presentation today is entitled “Political Evolution of the International Space Station: Prospects for Future Success,” and examines the evolution of the International Space Station (ISS), including major developments and the political challenges it has faced over time. These include important political milestones, such as President Ronald Reagan’s announcement of the program, the budget cuts and policy debates that occurred in the late 1980s, the near cancelation of the station program in 1993, the decision to include Russia in the partnership and the role of the ISS in the “Vision for Space Exploration.” It also addresses more recent policy changes, such as the discussion of the ISS in the Augustine Report, President Obama’s FY2011 Budget Request and the NASA FY2011 Authorization Bill.

According to John, continued utilization of the International Space Station will depend on continued political support. “Throughout its development, political support for the ISS has been based not on one primary benefit, but on a wide variety of benefit areas,” she said. “Continued success will depend on how these various benefits are recognized and supported by future policy.”

« The Association of Space Explorers Partners with ISU