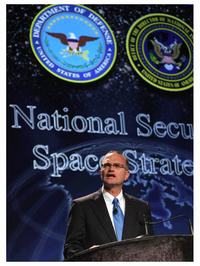 Ambassador Gregory L. Schulte, deputy assistant secretary of defense for space policy for the U.S. Department of Defense spoke about the “three Cs” of space – Congested, Contested, Competitive – when he addressed the 27th National Space Symposium in Colorado Springs this past April.

Keying in on how space is being used to support troops in the Middle East, Schulte said that space assets are critical to national security, but that the three Cs create challenges. He cited examples of each:

In this environment, he said, the DoD has a new strategy, cosigned by the secretary of defense and the director of national of intelligence, aimed at strengthening safety, stability and security, as well as energizing the industrial base. He gave his thoughts on three of the many key approaches:

He laid out four steps critical to deterrence:

“We look at not just deterrence in space, but space in deterrence.”

Schulte said that the U.S. must change its way of thinking and that broad partnership are needed at all levels to move forward. He then issued challenges to key actors:

He ended by suggesting the use of existing organizations such as NATO to implement this strategy.

During the Q&A, Schulte made statements about several key challenges and opportunities: