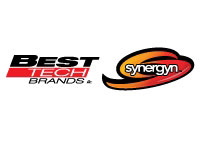 Best Tech Brands is marketing Synergyn™ branded diesel and gasoline additives that are proprietary, high-performance, high-margin and produced primarily from agricultural products. Two versions are in the market:

Synergyn combustion enhancers are unlike other additives because they accelerate the combustion process, releasing more of the energy in the fuel when the piston is close to top dead center. This provides higher energy conversion and higher thermal efficiency – more output with less waste heat. In testing by customers, including an Interstate Battery distributor and Dart Container Corporation, Synergyn additives were shown to improve fuel mileage in on-road test by more than 30 percent.

Best Tech Brands worked closely with a NASA Marshall Space Flight Center team to address stiction and temperature extremes, with the objective of developing a new family of combustion enhancers for Otto, Diesel and Rankine cycle energy conversion devices. When dyno-tested, the developments resulting from this research conclusively demonstrated much faster heat release that improves fuel economy by 5 percent to 25 percent in cars and trucks.

About Best Tech Brands
Founded in 2008 and based in Houston, privately owned Best Tech Brands began commercial production in 2011. Synergyn-branded fuel additives have demonstrated increased mileage results throughout rigorous protocols and test procedures and in independent laboratory testing and chassis dynamometer testing. The additives have been tested in cars, light heavy duty trucks and stationary generators. Synergyn additives are now being commercialized nationwide in on and off road applications. See more at www.synergynusa.com.

Space Certification products and services have been scrutinized by the Space Foundation, working closely with NASA, the European Space Agency (ESA) and other organizations engaged in space research and development.

About the Space Foundation
The foremost advocate for the space industry and an expert in all aspects of space, the Space Foundation is a global, nonprofit leader in space awareness, educational programs that bring space into the classroom and major industry events, including the National Space Symposium, all in support of its mission “to advance space-related endeavors to inspire, enable and propel humanity.” The Space Foundation publishes The Space Report: The Authoritative Guide to Global Space Activity and provides three indices that track daily performance of the space industry. Through its Space Certification and Space Technology Hall of Fame® programs, the Space Foundation recognizes space-based technologies and innovations that have been adapted to improve life on Earth. Founded in 1983 and headquartered in Colorado Springs, the Space Foundation conducts research and analysis and government affairs activities from its Washington, D.C., office and has a field office in Houston, Texas. For more information, visit www.SpaceFoundation.org. Follow us on Twitter, Facebook, and LinkedIn, and read about the latest space news and Space Foundation activities in Space Watch.

*The 1975 Energy Policy Conservation Act, passed in response to the 1973-74 oil crisis, added Title V, Improving Automotive Efficiency, to the Motor Vehicle Information and Cost Savings Act and established CAFE standards for passenger cars and light duty trucks (LDT). The Act had a near term goal of doubling new car fuel economy by model year (MY) 1985. However, since that time, the standards remained almost unchanged. Under the 2007 Energy Independence and Security Act, CAFE standards should be significantly tightened by 2020.