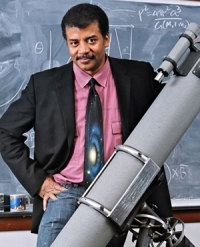 Colorado Springs, Colo.(April 4, 2012) – Join Rocky Mountain PBS and the Space Foundation for a remarkable opportunity to share the company of some of the world’s greatest scientific minds.

This special joint fundraiser takes place on April 19 at the Space Foundation’s 28th National Space Symposium, to be held at The Broadmoor Hotel in Colorado Springs, Colo. A $100 ticket includes:

How to Purchase Tickets
Tickets are available online at www.rmpbs.org.

About Neil deGrasse Tyson
Neil deGrasse Tyson was born and raised in New York City, where he was educated in the public schools through his graduation from the Bronx High School of Science. Tyson went on to earn his BA in Physics from Harvard and his PhD in Astrophysics from Columbia. Tyson’s professional research interests are broad, but include star formation, exploding stars, dwarf galaxies, and the structure of our Milky Way. He has served on commissions that studied the Future of the U.S. Aerospace Industry and the Implementation of the United States Space Exploration Policy, dubbed the “Moon, Mars, and Beyond” commission. He is the author of dozens of professional publications and 10 books, including his memoir, The Sky is Not the Limit: Adventures of an Urban Astrophysicist and Origins: Fourteen Billion Years of Cosmic Evolution, co-written with Donald Goldsmith. For five seasons, beginning in the fall of 2006, Tyson appeared as the on-camera host of NOVA ScienceNOW.