Words from New Space Foundation President Chuck Zimkas: The Way We Were and Today 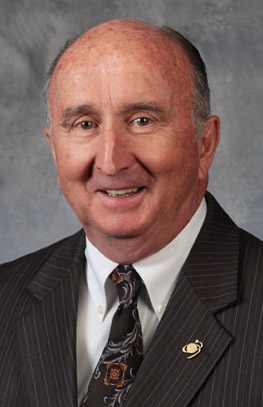 What a complete surprise the recent announcement of my promotion to president of the Space Foundation was to me! Never in my imagination did I ever dream of becoming the president and after the announcement finally set in, I began to think back to where it all started. I joined the Space Foundation on July 1, 1986, and I can assure you there are lots of stories to be told from then to now, but my purpose is to write an article not a book.

When I came on board in 1986, we were a very small group of employees, now referred to as team members, and a few dedicated volunteers. Through the generosity of a leading businessman, we occupied office space free of the expenses of rent and utilities. Most of the office furniture was either donated or on loan. Some of the office supplies, business cards, repair and maintenance and other services were provided free of charge and we were grateful for the community support. Now today, we own and occupy a 45,715 square foot condo office space that includes the Northrop Grumman Science Center and El Pomar Space Gallery, with more additions on the horizon.

During the summer of 1986, we hosted our first teacher’s course entitled, “Getting Comfortable Teaching with Space.” This was our entry into the space education world and the foundation for our current Space Across the Curriculum courses, held annually for educators from across the country. The course was held at the United States Air Force Academy and cadet instructors/professors were the course presenters.

Since then, our courses have gone beyond the boundaries of the Academy and are held throughout the United States. We have since expanded our programs and serve as a development center for teachers, plus we have added student programs such as Audience with an Astronaut and in-school and after-school programs just to name a few. We are major player in providing national quality education programs.

My first symposium was the third National Space Symposium held in January of 1987 at The Broadmoor Hotel – during a snow storm, I might add. There were approximately 280 participants and I don’t think the storm affected the numbers because the majority of attendees were local. The sessions and meals were held in the International Center of The Broadmoor with room to spare in both areas. It was no different in the exhibit area in Colorado Hall. Many of our exhibitors were local and we did not fill the hall. Now we have more than 9,000 symposium participants and over 53,000 square feet of exhibit space which has prompted the addition of a 40,000 square foot temporary structure to accommodate all of the exhibits. Our National Space Symposium has earned the reputation as the MUST attend space event and our attendee numbers reflect that fact.

As referenced above, there are many more stories to be told, but one important story is the people that I have had the opportunity to work with and for over the past 26+ years. Some are still here and others went off to follow their dreams in other areas of business. All in all, they and our current team members, have made an impact and difference on so many and that is the trademark of success at the Space Foundation.

Chuck Zimkas, who was named named president of the Space Foundation in October 2012, is responsible for operations, education programs, marketing and communications, customer service, facilities, human resources, event planning, information technology, logistics and operation of the new Space Foundation Visitors Center. Before being named to his current position, he served as the chief operating officer for the Space Foundation. Zimkas joined the Space Foundation in 1986, following a 26-year Air Force career, during which he was selected as one of the Twelve Outstanding Airmen of the Year for the United States Air Force, as senior enlisted advisor for NORAD and as the first Air Force Space Command senior enlisted advisor. After Zimkas’ Air Force retirement, Air Force Space Command dedicated its Enlisted Heritage Room in his honor. Zimkas is active in national, regional and community activities, including serving as a member of the Rocky Mountain Chapter of National Defense Industrial Association (NDIA), the Lance P. Sijan Chapter of the Air Force Association (AFA) and as vice president of the Arrowswest Owners Association Board. He is an Emeritus Member of the AFA National Board of Directors.