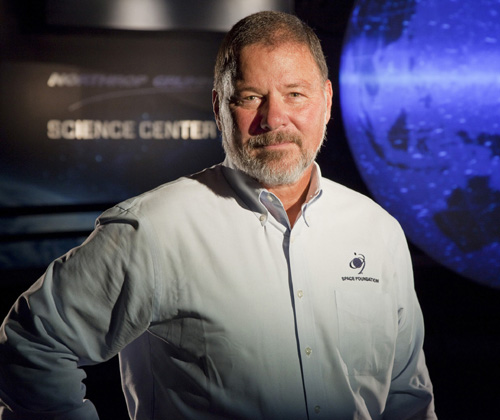 There are many variations on the famous Mark Twain “report of my death” quote, so let me set the record straight. Twain penned the original note in May 1897 and it reads thusly:

“James Ross Clemens, a cousin of mine, was seriously ill two or three weeks ago, in London, but is well now.

It’s an instructive short course in how rumor mills work, and how people get misquoted. And it is particularly apt as we approach the 29th National Space Symposium.

The rumors of our decline are ill-founded and exaggerated.

The Space Foundation once again expects to host about 9,000 people here in Colorado Springs for the Space Symposium and Symposium-related events. To date, only one category of participant, space professional registrants, is off slightly – a miniscule 4 percent decline from last year. While the “epic fail” of Congress and the Administration to manage the finances of the Republic has certainly caused confusion and gyrations among the government space enterprise and its contracting community, the continued growth and success of the industry outside the influence of the U.S. government buoys the global space economy, and, with it, the Space Symposium.

The latest data, gleaned from our own The Space Report 2013, is most instructive. The global space economy grew by a very healthy 6.7 percent in 2012, to more than $304 billion.  Almost all of that growth came from outside the U.S. federal space enterprise. In fact, in the United States, employment in the space sector declined for the fifth consecutive year, while globally, however, space sector employment increased yet again.

Participation in the Space Symposium reflects the realities of the global space economy, of which the U.S. federal government space enterprise is a smaller and smaller component. Last year, we saw a significant shift on the exhibit floor as commercial and international organizations gobbled up space abandoned by contractors heavily dependent upon the U.S. government. This year we’ll see the temporary absence of a few government organizations on the exhibit floor – but, as we announced a month ago, the Lockheed Martin Exhibit Center and Lockheed Martin Exhibit Pavilion are once again sold out.

To be sure, a significant and tragic amount of chaos and pain has been caused by sequestration, by Congress adopting an FY13 budget six months late, by the Administration still not having submitted the FY14 budget proposal that was due Feb. 4 and the horrifically ill-advised promulgation by the Office of Management and Budget of OMB Memorandum M-12-12, limiting government travel for meetings and conferences.

(Yes, the Space Foundation had to do some serious scrambling to find a suitable and representative cadre of government participants for the Space Symposium program agenda – and, we’ve done that.)

Certainly, we realize that the wholly inappropriate response by government to conference improprieties perpetrated by a very few government employees has needlessly and wrongly crippled other conferences and events. Some have downsized, others have gone on hiatus or cancelled – we’re even aware of one non-profit that has folded its tent and gone out of business.

But just as Mark Twain was not James Ross Clemens, the Space Symposium is not one of those other events.

There’s no question the Space Symposium is going to be different this year, just as the industry itself is different from a couple of years ago, and we’re looking forward to the changes:

If there’s one thing we’re always grateful for where the Space Symposium is concerned, it is the steadfast support of our customers. Most have learned over the years that one of the biggest advantages to participating in the Space Symposium is the business-to-business meeting and networking opportunities. While finding the time for honest and productive dialog with government customers is important, very seldom is a government contract signed during the Space Symposium. However, it is routine that business-to-business contracts are negotiated and signed here, and that has become a significant focus of the many off-agenda meetings that take place. We’re grateful to the commercial companies, like Intelsat and SES, that continue to invest in the Space Symposium as a key business platform, as well as to companies including Lockheed Martin, Northrop Grumman, Raytheon and The Boeing Company that find value with their supplier chain in addition to their government customer community.

It’s been a wild ride getting ready for this 29th National Space Symposium. Our team and our many partner and member organizations have responded creatively and well. It’s too early to tell whether this absurd U.S. government budget environment will prove to be a one-off anomaly, or simply the new normal. Either way, the space industry is very resilient. We will rebound, and we’ll be stronger for the experience.

For now, the trucks and trailers are inbound, the cranes and forklifts are on site at The Broadmoor, and the Space Foundation is once again preparing to welcome the world to the greatest space show on Earth.

The View From Here is that rumors to the contrary are exaggerated.