A New Lunar Mission for Everyone

Based in the U.K., the Lunar Missions Trust is a not-for-profit organization that is overseeing the governance of the project. Lunar Mission One was backed on Kickstarter by more than 7,000 people from more than 60 countries. These ‘Founder Backers’ were joined by several corporate donors and schools who also made pledges of up to £5,000 ($7,800).

In addition, a number of high-profile individuals have endorsed the project, including Brian Cox, Stephen Hawking and Dan Snow. The funding campaign on Kickstarter closed at midnight (GMT) on Dec. 17. All of the money raised will be used to finance the initial project management and program planning phase.

In December, in preparation for this next phase of work, Lunar Mission One made a series of high-profile appointments to its newly formed International Advisory Board. These include Mazlan Othman, the former Director of the United Nations Office for Outer Space Affairs (UNOOSA), former NASA astronaut Dan Tani and U.S. space business entrepreneur Bob Brumley.

Professor Stephen Hawking commented, “Congratulations to Lunar Mission One and all its backers. They have achieved what are the first steps towards a lasting legacy for space exploration. Lunar Mission One is bringing space exploration to the people, and I have no doubt that young people and adults alike will be inspired by the ambition and passion of all those involved in the project. As a truly scientific endeavour, I wish it nothing but success over the coming years.”

David Iron, Founder of Lunar Missions Ltd added, “The public response has been amazing. People from all over the world are supporting Lunar Mission One and we would like to thank everyone who has made a pledge so far. We have been inspired by the support and the enthusiasm of our Founder Backers on Kickstarter – the self-proclaimed ‘Luminauts’. Hitting and exceeding our target is a fantastic achievement – it is their achievement and we look forward to working with them all over the next 10 years to bring this project to fruition.”

Ian Taylor, Chair of Lunar Missions Ltd said, “Lunar Mission One has deliberately been launched as an independent venture which is not controlled by government agencies. This project will be built using public support alongside the skills and expertise of some of the world’s leading scientists, engineers and technologists. Having achieved what we have today, we are celebrating the beginning of a ten-year journey of collaboration, innovation and exploration.”

Within 10 years, Lunar Mission One will land on the Moon’s South Pole. Using innovative new technology, the mission’s aim is to drill to a depth of at least 20 meters deep, but potentially as deep as 100 meters, allowing the mission to access and analyze for the first time lunar rock dating back about 4.5 billion years. Scientists anticipate that this mission will provide new and significantly advanced insights into the origins and evolution of the Earth-Moon system, and its journey through the Galaxy. It will also tell us more about the practicality of a permanent manned base at the lunar South Pole.

RAL Space, which has been involved in developing more than 200 space missions and has supported NASA and European Space Agency missions including Rosetta, is acting as a technical advisor to the Mission and will now start building a project team.

The mission will leave a billion-year time capsule with an extensive digital record of life on Earth. In addition, anyone from around the world will be able to reserve space in a digital ‘memory box’ where they can store personal information, including the option of a strand of hair.

Education and inspiration are central to the mission, which aims to inspire a generation to learn more about space, science, engineering and technology through a worldwide program of educational engagement. Educational partners backing the project include The Institute of Education, the International Space University, Open University and the National Space Academy. 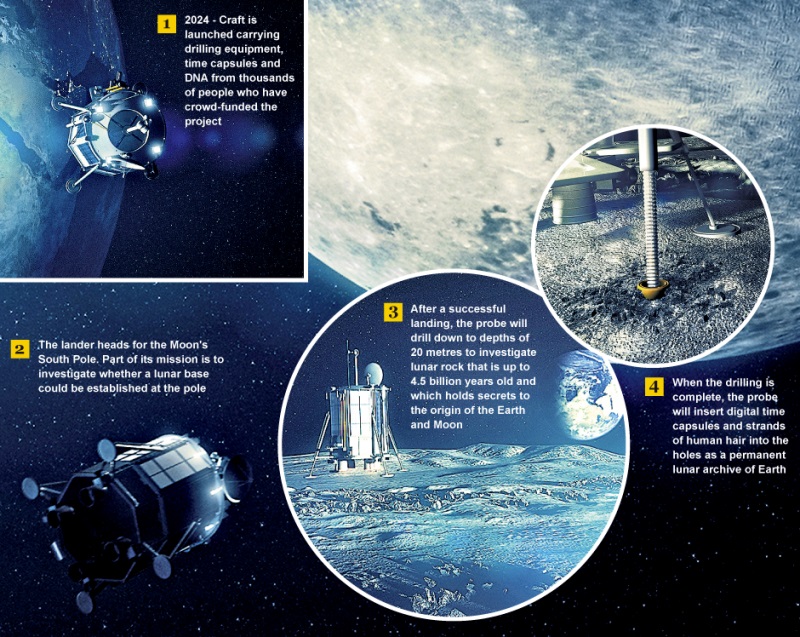