A rocket sat on a Florida launch pad on a late February morning. The rocket, a Saturn 1B, looked almost like a Saturn V rocket. But it was 1966, and the Saturn V was still in development. The S 1B was smaller, about two-thirds the height of the Saturn V, but it was ready to launch for NASA’s AS-201 test for the Apollo program. 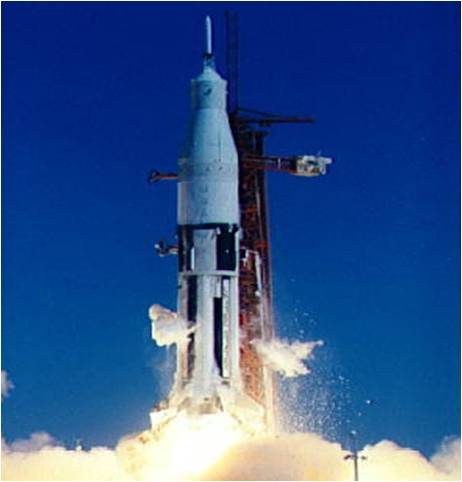 Everyone involved with AS-201 was ready for the rocket to launch. The S 1B wasn’t supposed to be on the pad anymore, but issues, mainly weather, had kept the rocket from launching three days sooner. AS-201 had been postponed three times. The third postponement occurred three seconds before rocket engine ignition, lengthening an already long crew shift started in the prior afternoon. The team was determined to get AS-201 into the sky. After a quick conference over the possible causes of latest problem, the launch team resolved the issue, resetting the launch time for AS-201.

By 11:12 AM AS-201 launched, nearly two hours after the last postponement. The S 1B’s two stages boosted an unmanned command and service module (CSM) — similar to the capsule to be used on later Saturn V/Apollo missions — to about 480 kilometers (about 300 miles) above the Earth. The CSM was on a parabolic flight path, traveling up and coming down to Earth about 30 minutes later. AS-201 was testing NASA’s methods of separating the CSM from the second booster stage, which was nearly identical to the stage that would be used for the Saturn V rocket. NASA also wanted to see if its solution for a CSM heat shield was going to work.

At 425 kilometers (264 miles), the second stage successfully separated from the CSM. The CSM continued upwards, then fired its engine for reentry. Before firing the engine, the CSM was moving slightly above 8 kilometers per second (nearly 5 miles per second, or 18,000 miles per hour). By design, the CSM’s speed exceeded the speed of a typical Apollo capsule reentry.

The capsule splashed down safely in the Atlantic, a little over 8,800 kilometers (5,500 miles) from its launch origin, proving the CSM’s heat shield provided adequate protection during atmospheric reentry. It would be picked up later by a Navy aircraft carrier and examined by NASA engineers to determine what was working and could be used in Apollo’s lunar missions. As the first launch of an S 1B with a CSM payload, NASA considered AS-201 successful. The test’s launch team could go home and relax—for a little while.