Recent Space-related Activity on the Hill

Congress returned from August recess on Sept. 6, following the Labor Day weekend. The House Space Subcommittee went straight to work, holding a hearing on the afternoon of Sept. 7, entitled “Commercial Remote Sensing: Facilitating Innovation and Leadership.” The hearing discussion focused on the state of the regulatory environment surrounding remote sensing and the perspectives of government and industry stakeholders.

On the morning of Sept. 13, the Senate Armed Services Committee held a hearing on encryption and cyber matters. Marcel J. Lettre II, the Under Secretary of Defense for Intelligence, and ADM Michael S. Rogers, the Commander of United States Cyber Command, were invited to speak on cybersecurity issues and relevant military capabilities. 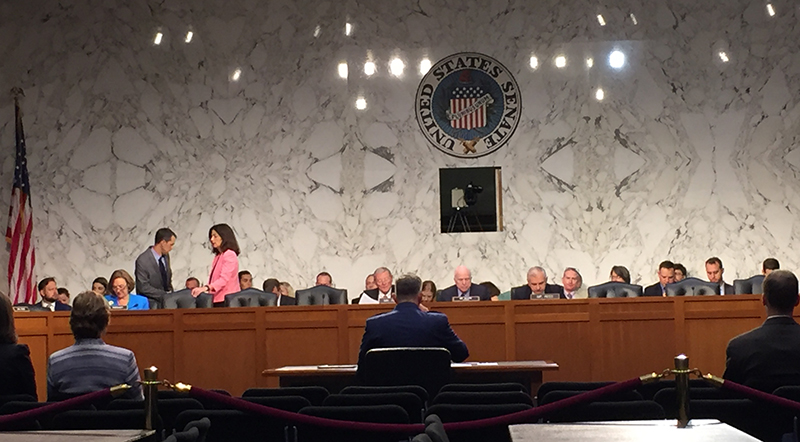 The following week, on the morning of Sept. 20, the Senate Armed Services Committee held a confirmation hearing (pictured) for General John Hyten, who was nominated to lead the U.S. Strategic Command by President Obama on Sept. 9. The President also nominated Lt. Gen. John “Jay” Raymond to succeed Hyten as commander of Air Force Space Command.

The 2016 NASA Transition Authorization Act was introduced in the Senate on Sept. 15. The Senate Commerce, Science, and Transportation Committee held a full committee markup of the bipartisan legislation on the morning of Sept. 21, alongside the Inspiring Next Space Pioneers, Innovators, Researchers, and Explorers (INSPIRE) Women Act, which will direct NASA to work to increase female involvement in STEM education fields. With very little discussion, both pieces of legislation were approved by the committee for a vote on the Senate Floor.

With both branches of Congress out of town in October before the election, the House of Representatives has little time remaining to pass its own authorization legislation for NASA before the end of the year. Congress has already been operating under pressure during September, given the looming deadline for passing a budget for the upcoming fiscal year. There likely will be a Continuing Resolution passed before the House and Senate adjourn for October to fund the government through the election and into early December.

As the new Space Foundation Manager – Washington Operations, Charles Harris is based at our office in Arlington, Va. He graduated from the University of North Carolina at Chapel Hill in 2014 with a double major in Public Policy and Communication Studies, and a minor in Astronomy. He has previously worked as a Research Associate for the Space Studies Board and the Aeronautics and Space Engineering Board at the National Academies of Science, Engineering and Medicine, and as a Junior Associate with the independent policy firm PoliSpace, providing clients in the commercial space sector with government relations services and strategic consulting. He has held internships with NASA’s Space Technology Mission Directorate at NASA Headquarters and with the Committee on Science, Space, & Technology in the U.S. House of Representatives.