With a new Congress and a new administration in place, space policy and legislation, both civil and national security-related, will be integral to this year’s 33rd Space Symposium.

Perspectives from U.S. Congressmen will be provided at the Symposium by speakers Rep. Mike Rogers (R-AL) and Rep. Jim Bridenstine (R-OK).

“Both of these distinguished congressional leaders will be central to the Symposium’s dialogues and activity,” said Brendan Curry, Space Foundation Vice President — Washington Operations. On Tuesday morning, April 4, Rep. Rogers will speak at an invitation-only event at the Symposium — the annual Government Affairs Breakfast. 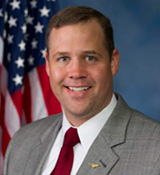 Rep. Bridenstine
“Congressman Bridenstine has distinguished himself in a relatively short time in Congress as a leader on space,” said Curry. “He sits on the House Armed Services Committee, as well as the House Science, Space and Technology Committee. He is also noted for his comprehensive American Space Renaissance Act.”

On Tuesday evening, April 4, Rep. Bridenstine will be the featured speaker at the Symposium’s Corporate Partnership Dinner, co-sponsored by Raytheon, with corporate host Richard R. Yuse, President, Space and Airborne Systems, Raytheon Company. Tickets for the dinner are available here.

About the 33rd Space Symposium
For its 33rd year, the Space Foundation’s Space Symposium will be held April 3-6 at The Broadmoor in Colorado Springs, bringing together government, military and industry decision makers from around the world to address crucial issues.

Speakers and panels can be found on the expanded agenda, and see all of the tracks, including Tech Track, Cyber 1.7 Classified, Space Classified and the New Generation Space Leader programs here.