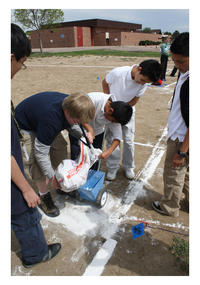 Sixth grade students at the Jack Swigert Aerospace Academy in Colorado Springs are taking a hands-on approach to math by creating a half-scale outline of the International Space Station (ISS) on their school softball field. The 250 sixth grade math students are studying scale in class and calculated the dimensions needed to create a half-sized outline of the ISS using string, plastic marker flags, and construction texture to chalk the outline.

The students are studying the ISS in a program that incorporates each of the four core curriculum – math, science, language arts, and social studies. For example, as they lay out the sections of the ISS they discuss the science involved in sustaining life on board, such as power source. They learn about the different countries involved in the ISS, and examine photos of those countries taken from space from the ISS while discussing cultures and communication.

The Jack Swigert Aerospace Academy curriculum, which is collaboratively developed by the Space Foundation and Colorado Springs School District 11, uses space and aerospace themes and principles to teach a broad range of subjects, with focus on improving students’ proficiency in science, technology, engineering, and mathematics (STEM).