Katase Vows to Contribute to the World 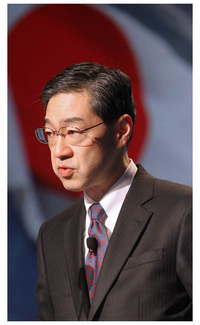 The global nature of space was underscored repeatedly during the 27th National Space Symposium with a number of speakers from space organizations around the world. Despite the devastating earthquake and tsunami just a few weeks earlier, Japan’s Hirofumi Katase, deputy secretary-general for the Cabinet Secretariat of the government of Japan’s Secretariat Headquarters for Space Policy, spoke in Colorado Springs, talking about Japan’s space policy.

He started by saying that, throughout the disaster, space assets proved to be robust and indispensible; GPS helped to determine wave height; remote sensing satellite images helped assess damage in the disaster area; communication with the disaster area was made possible with satellites.

Katase then went on to describe Japan’s basic space policy as having four pillars: 1) promote the utilization of space for both national security and civil use, 2) maintain space industrial base, 3) promote leading-edge research and development and 4) engender international cooperation and collaboration.

Discussing international cooperation, Katse said, “The basic concept is to develop advanced system applications of space and contribute to the world by actively disseminating them.” Noting that a combination of data from the Japan Aerospace Exploration Agency (JAXA) and other agencies is used to help predict good fishing areas, he said that JAXA will develop a platform for further utilization of satellite data with Japanese and other sensor data. For example, he said, the government of Japan is developing the Quazi-Zenith Satellite System (Michibiki) that is fully compatible and interoperable with GPS and that can be accessed by the entire Asia-Pacific region.

“There is increasing recognition of the importance of space systems after the earthquake, promoting space policy and putting priority on space utilization,” he said. “Japan will focus on international cooperation and make an active contribution to the world.”