Bruce Carlson is a Featured Speaker 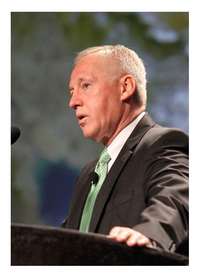 National Reconnaissance Office (NRO) Director Bruce Carlson, will be a featured speaker at the 28th National Space Symposium, to be held April 16-19 at The Broadmoor Hotel in Colorado Springs, Colo.

Presented by the Space Foundation, the 28th National Space Symposium brings together all sectors of space to highlight accomplishments and address opportunities and issues facing the global space community today. The Symposium offers presentations and panels covering all aspects of space, plus special events and presentation of several prestigious space-related awards.

A command pilot with more than 3,700 flying hours in 10 different aircraft, his flying assignments included commanding the Air Force’s first stealth fighter wing, the 49th Fighter Wing at Holloman AFB, N.M. His staff assignments included positions at Tactical Air Command, Headquarters U.S. Air Force, and the offices of the secretary of the Air Force and secretary of defense. He also served as the director of force structure, resources and assessment on the Joint Staff; commander of the 8th Air Force, Barksdale AFB, La.; and Joint Functional Component commander for space and global strike, U.S. Strategic Command, Offutt AFB, Neb.

Prior to his retirement from the U.S. Air Force, Carlson served as commander Air Force Materiel Command, Wright-Patterson AFB, Ohio, which is responsible developing, testing, acquiring and sustaining Air Force weapons systems. He was promoted from lieutenant general to general in 2005.

To Register
The Symposium will be offered in conjunction with Cyber 1.2, which will examine the evolution of cyberspace. Separate registration is required for Cyber 1.2 and secure online registration for both is available at www.NationalSpaceSymposium.org/register. Industry attendees can save money by registering before Jan. 13.