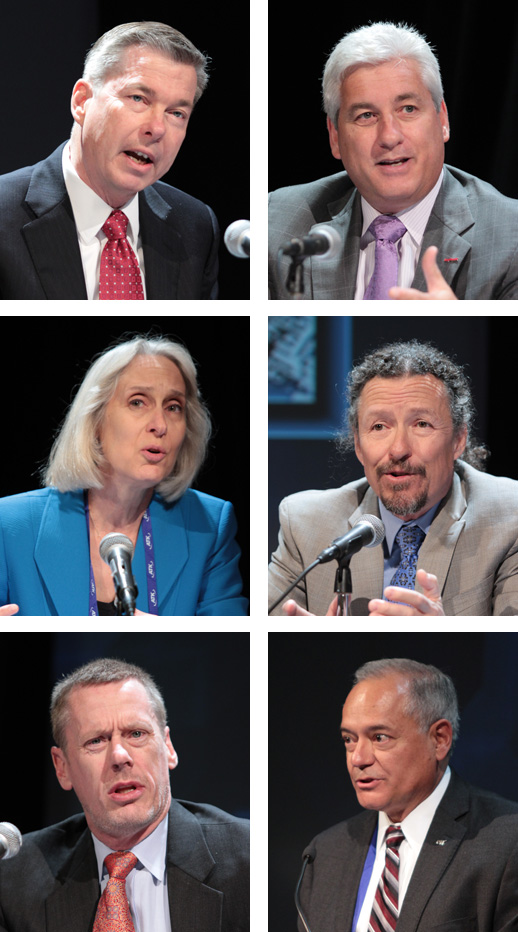 Rios opened by asserting that industry is a crucial player in cyberspace, and that it will advance more into the area of cyber services, not just IT. Kuhn began by stating that DoD systems experience more than one million attacks per day, or 400 million per year, stressing that innovation is key to cyber defense. Houck’s opening statements referenced the $1.2B challenge in efficiency, emphasizing the need for mobility, secure infrastructure and secure applications. Croom opened by framing cyber defense as an economic problem, while Jolly asked customers to think about how they engage industry, while industry focuses to shift from pieces of capabilities to complete solutions. Hawkins expressed the need to take advantage of opportunities to design new systems, or to upgrade them. Furthermore, he stated that infrastructure cannot be put in place with the expectation that it will last, because the threat is too dynamic.

Following the opening statements, the panel continued addressing the issue of the “need to know” versus “the right to share,” prompting Croom to state that much information could be less classified. Hawkins concurred, arguing that decisions regarding what information needs to be shared are critical. The discussion continued with Kuhn stating the advantage of rapid acquisition methods to advance capabilities more rapidly, but also pointed out the danger of losing an enterprise-wide point of view.

Regarding academic partnerships, Croom emphasized industry involvement in cyber education at universities, although he later said there is a perceived weakness in cyber training, adding that industry often has to invest heavily in training rather than depending on academia. At that point, Kuhn referenced the “CyberPatriot” competition, which involves high school students.

On the topic of a budget-constrained environment, Croom said he saw one advantage to downsized budgets in that they “force jointness” among agencies and services. Jolly also addressed agile software development, saying it is making a difference in fielding capabilities faster regarding complex mission systems.