COLORADO SPRINGS, Colo. (June 18, 2012) — The Space Foundation is now seeking nominations for induction into the prestigious Space Technology Hall of Fame® in 2013. The program honors innovations by organizations and individuals who transform space technology into commercial products that improve life on Earth. Nomination information, including online and downloadable nomination forms, is available at www.spacefoundation.org/programs/space-technology-hall-fame. 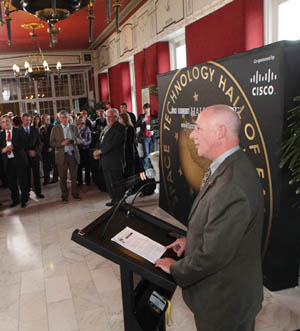 The deadline is Friday, Aug. 31, and anyone can submit a nomination of a technology that was developed anywhere in the world for use in space and then modified or adopted for use on Earth.

The Space Foundation, in cooperation with NASA, established the Space Technology Hall of Fame® in 1988 to increase public awareness of the benefits that result from space exploration programs and to encourage further innovation. Since that time, 67 technologies have been inducted.

The 2012 inductees were: a low-density, light-weight flexible aerogel insulating material; and a high-resolution optical sensing system called FireWatch that detects forest fires before they can cause serious environmental damage. FireWatch was the first inducted technology from Europe/DLR.

Award ceremonies for the 2013 inductees and honorees will be part of the 29th National Space Symposium, which will be held at The Broadmoor Hotel in Colorado Springs, Colo., April 8-11, 2013. Conducted by the Space Foundation, the Symposium is the premier annual gathering of the global space community.

See photos of the 2012 Space Technology Hall of Fame® private induction ceremony at http://bit.ly/LAa4JD. See video of the dinner http://bit.ly/JSBxCV.