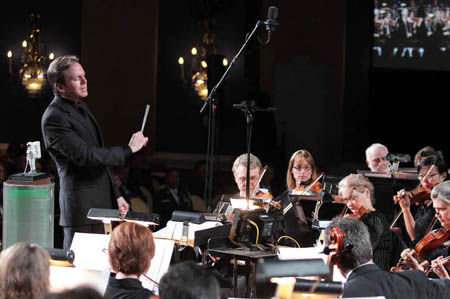 During the opening ceremony of the Space Foundation’s 28th National Space Symposium at The Broadmoor Hotel in April, the Colorado Springs Philharmonic performed Mars, the Bringer of War from The Planets Op. 32 by Gustav Holst.

The Symposium concert was not open to the general public, but the Philharmonic later performed a public concert as part of its Vanguard Series, entitled The Planets. The orchestra performed The Planets in its entirety, under the direction of Associate Conductor Thomas Wilson, and the concert was sponsored in part by the Space Foundation.

Now anyone who missed that performance will have the opportunity to experience it, courtesy of KCME-FM.

KCME-FM 88.7 broadcasts recordings of live Colorado Springs Philharmonic performances on a delayed basis. On Aug. 6 at 8:00 p.m., KCME will rebroadcast The Planets concert.

Michael Campion hosts the program, which includes information about the music and the performers, and features an intermission interview with one or more of the Philharmonic performers.