One way the Space Foundation is promoting space awareness in the Colorado Springs region is through support of a current space exhibit at the Pioneers Museum in downtown Colorado Springs (see article in November Space Watch).

The Space Foundation is partnering with the Pioneers Museum to support a traveling exhibit from the Charles M. Schulz Museum called To the Moon: Snoopy Soars with NASA. The exhibition runs through April 20 and examines the history of Apollo 10 and the role characters from Schulz's popular Peanuts comic strip played in that flight and in the NASA Manned Flight Awareness safety program. The Space Foundation helped open the exhibit on Nov. 17 with a children's activity booth and drawings for prizes.

The exhibition explores the long relationship between Schulz and NASA, beginning in 1968 with the inception of the Snoopy, the Astronaut program, through the flight of Apollo 10, to the present day as the comic strip character Snoopy continues his important role as NASA's safety mascot.

Schulz, who authored the Peanuts comic strip from 1950 until he died in 2000, had personal ties to Colorado Springs, where he lived in 1951. The Charles M. Schulz Museum is located in Santa Rosa, Calif.

More than 100 people attended the presentation that included overviews of each of the panelists NASA careers and a lively question-and-answer session with the audience. Common themes among the answers were the importance of studying hard in school and the power of space exploration to inspire and drive humanity. View pictures here. 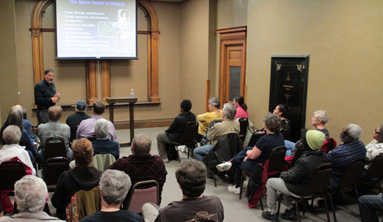 Nearly 40 people attended the presentation, which included: a description of what defines space; the importance of space technology to our everyday lives; explanation of Colorado's role in space and local space industry's impact on Colorado economy; and overview of the Space Foundation and our new Visitors Center and our emphasis on STEM education. 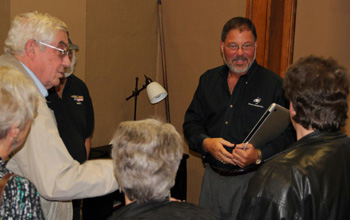 Attendees asked many questions after the presentation, and the subjects ranged from concerns about space debris to the likelihood of one-way manned missions to Mars.

The Colorado Springs Pioneers Museum, and the current space exhibit To the Moon: Snoopy Soars with NASA, is open free to the public every Tuesday through Saturday, 10 a.m. to 5 p.m.