COLORADO SPRINGS, Colo. (March 4, 2013) – Two potentially life-saving innovations will be the 2013 inductees into the Space Foundation’s Space Technology Hall of Fame®, which recognizes technologies originally developed for – or dramatically improved by – space applications that now improve life on Earth. The induction will be next month during the 29th National Space Symposium at The Broadmoor Hotel in Colorado Springs, Colo.

Three events at the Space Symposium will honor the inductees on April 11:

The Private Induction Ceremony is by invitation only and the Reception and Dinner are open to all Space Symposium attendees. 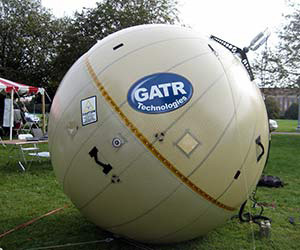 In 1997, SRS Technologies received a NASA Small Business Innovation Research (SBIR) contract to develop a solar concentrator for power generation. While developing an inflatable model, SRS researchers realized that a variant could be used for ground-based communications.

In 2004, GATR (Ground Antenna Transmit Receive) Technologies was formed to license and commercialize the spinoff for use on Earth and, in 2008, GATR delivered the world’s first inflatable antenna certified by the Federal Communications Commission.

“This technology has benefited the U.S. military and aided disaster relief efforts all over the world – providing critical communications in the aftermath of hurricanes, tornadoes, earthquakes, wildfires and much more. We are extraordinarily gratified to see how this technology with roots in the Small Business Innovation Research program has made such a meaningful impact in people’s lives,” said James M. Free, director, NASA Glenn Research Center.

Mediphan
This Canadian-based technology has its origins in the challenges of diagnosing medical issues in space, where traditional imaging devices, such as MRI and CAT Scan equipment, are too large, heavy and energy-dependent for practical use. Compact low-power ultrasound machines originally developed and tested as diagnostic tools for human space missions can also be used to serve communities where larger equipment is too expensive or difficult to deliver.

In 2000, NASA Johnson Space Center approached Dr. Scott Dulchavsky of Henry Ford Hospital in Detroit to develop medical ultrasound remote diagnostic techniques for use by non-expert astronauts aboard the International Space Station (ISS). The goal was to create the basis for an operational telemedicine capability for future advanced space missions. He became lead investigator for the Advanced Diagnostic Ultrasound in Microgravity (ADUM) experiment, a collaborative effort between Johnson Space Center, Henry Ford Hospital and Wyle Laboratories Inc. in Houston.

The small ultrasound devices were developed through the Advanced Diagnostic Ultrasound in Microgravity (ADUM) experiment, which was flown on the ISS from 2003 to 2005. Principal Investigator Dr. Scott Dulchavsky, chair of the Department of Surgery at Henry Ford Hospital, led a team that trained the ISS astronauts to use remotely guided ultrasound to obtain a wide variety of diagnostic-quality medical images. Experts on the ground received images from the ISS through satellite downlink, demonstrating the effectiveness of ultrasound as a multipurpose, remote diagnostic tool.

Wyle, based in El Segundo, Calif., is a leading provider of specialized engineering, scientific and technical services to the Department of Defense, NASA and a variety of commercial customers.

The cooperation resulted in the formation of Mediphan, a remote medical diagnostics technology company based in Ottawa, which developed and commercialized two tools for terrestrial telemedicine use:

Using DistanceDoc or MedRecorder does not require special electronic wiring or cabling; the video streamed over the Internet can be accessed by technology ranging from lecture hall projectors to desktop workstations to personal digital assistants and smart phones.

Mediphan technologies enabled the cost-effective application of telemedicine solutions, created by Dulchavsky’s team and NASA for spaceflight to improve life on Earth, especially in developing countries around the world.

“The story behind this achievement began with the need to diagnose medical issues aboard the International Space Station. As we move space exploration forward, it is vitally important to collaborate with academia and industry to advance technological capabilities,” said Dr. Ellen Ochoa, director, NASA Johnson Space Center. “It is an honor to be recognized for the ingenuity and innovation of our dedicated employees.”

2013 Individual Inductees
The following individuals are being inducted into the Space Technology Hall of Fame®: 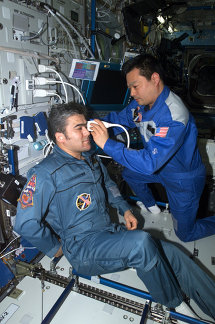 About the Judges
The panel of judges who selected the 2013 Space Technology Hall of Fame® inductees comprised:

Space Technology Hall of Fame Celebrates 25th Anniversary
“The 2013 inductees will help us mark our 25th year of honoring those who bring space technology ‘down to Earth’ to benefit our lives in countless ways,” said Kevin Cook, director – space awareness programs for the Space Foundation. “We’ll commemorate this anniversary by issuing a new, redesigned Space Technology Hall of Fame medallion for inductees.”

The Space Foundation’s Space Technology Hall of Fame was established to increase public awareness of the benefits that result from space exploration programs and to encourage further innovation. Since that time, 67 technologies have been inducted. Additional information about the Space Technology Hall of Fame®, including a complete list of inducted technologies, is available at www.SpaceTechHallofFame.org.

Nominations for 2014 Induction
The deadline to submit nominations for induction during 2014 will be Saturday, Aug. 31, 2013. Anyone may submit a nomination of a technology that was developed anywhere in the world for use in space and then modified or adopted for use on Earth. Nomination information, including online and downloadable nomination forms, is available at www.spacefoundation.org/programs/space-technology-hall-fame.

Space Symposium Registration
Award ceremonies for the 2013 inductees and honorees are part of the 29th National Space Symposium, which will be held at The Broadmoor Hotel in Colorado Springs, Colo., April 8-11. An Early Bird Discount for industry registration is in effect until March 15.