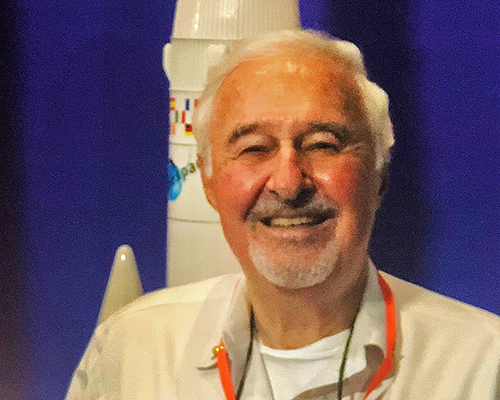 These Volunteer Spotlight articles profile some of the interesting and dedicated people who make Space Foundation programs possible. We could not do the work that we do without the generous and tireless support of our volunteers. This week, we are featuring Space Foundation Discovery Center volunteer Joe Santa.

Joe started his aerospace career in Hartford, Connecticut, where he worked in a research department generating requirements for the rocket engines used on various space missions. He then completed his graduate degree at the University of Michigan and continued his career in Huntington Beach, California, where he performed analysis in both celestial
mechanics and satellite network design.

Santa later headed an “Advanced Dynamics” section that supported the design of the Saturn IV and Saturn IVB stages of the Saturn V launch vehicle. He also developed mission planning software for the Manned Orbiting Laboratory (MOL). After that he headed all the independent research and development to integrate all of the major design disciplines (aerodynamics, structures, propulsion, etc.) into the design software so it would automatically generate the conceptual design of launch vehicles given their requirements.

Joe then changed companies and focused his activities on systems programs. He won contracts for technology programs which he then managed. He also managed the System Engineer Department for the Space Defense and Operations Center (SPADOC) program, and then moved from strategic to tactical programs. He won a major contract and became a program manager, heading a group of engineers to perform trade-off analyses to support TACOM (United States Army Tank-Automotive and Armaments Command) to develop a new family of armored vehicles. Later he became the program manager for the Command and Control/Battle Management system for a new Army air defense system (Corp Sam).

Santa’s other activities included being the Toastmasters Area (A2)/Founders District Area Governor, where he managed most of the Toastmasters clubs in Orange County, California. He also became an Associate Professor in California. Later, in Colorado Springs, he became an adjunct professor in the math department at Pikes Peak Community College, where he taught Calculus III and Differential Equations. Joe strongly believes in continuous education — while in California he took more than 25 courses at UCLA and the University of California Irvine.

Joe is a certified docent at the Space Foundation Discovery Center and has volunteered here for seven years. He loves giving presentations to audiences on the Science On a Sphere®, where he has the opportunity to discuss space topics with audience members.

SNC to Host Media Briefing to Provide an Update on its Space Transportation, Destination and Infrastructure Programs »