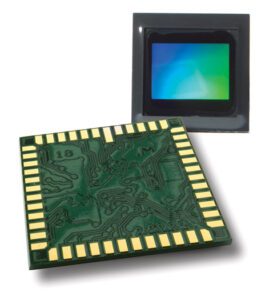 Since the 1970’s when charged coupled devices (CCD’s) were first developed, camera and video companies have been seeking to improve the technology. CCD’s provide good image quality, but they are expensive, power hungry, and with the required accessory chips, bulky. Recognizing the shortcomings of CCD technology, and with the continuing need for lightweight imaging systems especially for interplanetary spacecraft applications, the NASA Jet Propulsion Laboratory (JPL) began research on a second-generation solid state image sensor technology.

In late 1992 that research produced the complementary metal-oxide semiconductor Active Pixel Sensors (CMOS APS). By consolidating functions and reading images more efficiently, the APS requires 1% the power of a CCD system and is less than 10% the size. It also is less expensive to manufacture and is less susceptible to radiation damage in space, which enables affordable and practical use in spacecraft. Photobit, an entrepreneurial spin-off company of JPL, has applied this revolutionary solid state image sensor technology to new markets where small size and low power consumption are needed such as digital cameras, PC video conferencing, camcorders, and portable PC video phones. Other applications are found in the automotive industry where the APS can provide night vision enhancement systems for automobiles and in the medical industry for bone and dental x-rays. Acquisition of images through APS technology has reduced x-ray exposures from 90 to 99% in a couple of these medical and dental applications.

What had been a costly technology for evaluating bone density is now affordable to physicians and accessible to patients with a simple 30-second test that produces no discomfort. Also, for dentists, digital feedback of dental images can now replace conventional x-ray film and produce sharp images that appear almost instantly on a computer monitor. Further, these images are easier to store than x-ray film, and can be manipulated, colorized, and enhanced to provide additional information.