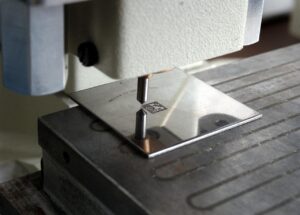 Product identification technology pioneered by NASA for tracking Space Shuttle parts is being used to mark everything from groceries to automobile parts.The application of compressed symbology, a two-dimensional symbol marking system to parts marking was developed at the Marshall Space Flight Center for the Space Shuttle Program, where millions and millions of parts, some as small as a dime, must be tracked.

Bar coding works well however it requires labels which don’t survive in space and other industrial conditions on earth. In the late 1980’s Fred Schramm was tasked with producing a system that could mark all, even the smallest of NASA’s parts. A symbology research lab was started at Marshall and operated under contract by Rockwell. The Chief Scientist was Don Roxby. After researching all types of marking technologies the two decided on the data matrix symbol, a small, square-shaped mark resembling a checkerboard. The two dimensional symbol is capable of storing as much as 100 times more information than a one-dimensional linear barcode. Schramm and Roxby were able to successfully apply and reliably read the data matrix symbol, as the patented symbol was useless until they accomplished this.

After the prototype was operational and tested RVSI obtained a license and created the Symbology Research Center to commercialize the technology. Since 1995, NASA and SRC have worked on the technology and have moved it into acceptance as the parts marking standard. During the last year the data matrix symbol has been adopted as the standard for auto parts, medical parts and soon it will be the standard for marking aerospace parts. It is estimated that the data matrix symbol industry will be a multi-billion dollar industry similar to the bar code sector.