In the early days of NASA’s space research, there was concern over problems of temperature control of non-rotating satellites. The side facing the sun would build up excessive heat, and the opposite side would become very cold, thus a serious threat to the survival of electronic and other spacecraft systems. To address the problem, Los Alamos Scientific Laboratories invented the heat pipe as a passive (consumes no energy) heat transfer device where a working fluid alternately evaporates and condenses, transferring heat from one region of the tube to another.

Applied to NASA spacecraft, this technology controlled the thermal extremes that could be so damaging to electronics and other systems. One of the earliest and best known commercial applications of this technology was for protection of the Alaska Pipe Line. A major technological concern was how to build a pipeline system that would not sink into the permafrost. The solution was a novel use of heat pipe systems to remove heat from the ground, maintaining the permafrost level during all conditions, and thus assuring the design load-bearing requirements of the pipeline. Subsequently, the Kennedy Space Center sponsored many studies whose objective was to develop commercial applications of heat pipe systems. Heat pipes are now regularly used to enhance the dehumidification performance of conventional air conditioners. They also are used in warehouses and supermarkets where controlled temperatures and humidity are needed to preserve perishable product quality. Significant energy savings are found in both these applications. Additionally, heat pipe technology can be found in solar heating systems, in the cooling of notebook computer processors, and in heater-less injection molding for plastics manufacturing. 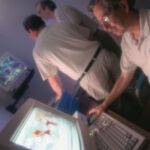 In 1978, the Science and Technology Laboratory (STL), formerly the Earth Resources Laboratory (ERL), at NASA's Stennis Space Center (SSC), began its program of image and geographical information system processing of satellite and airplane data. This data-gathering process is known…