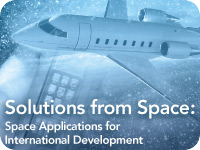 According to the paper, the advanced positioning, navigation, and timing capabilities offered by satellite systems can:

And, because these improvements are satellite-based rather than cockpit-based, they can be extended to a much broader class of aircraft, including small private airplanes that do not have sophisticated monitoring equipment, and unmanned aerial vehicles that do not have pilots onboard.

“As the economy improves, we can expect air travel – and air traffic – to rebound and then to grow,” said Space Foundation Vice President – Research and Analysis, Washington Operations Marty Hauser. “We have an extraordinary opportunity to use space technology to make the global air industry better as well as bigger. And, now is the perfect time to make that happen.”

Solutions from Space: Faster, Safer, Greener Commercial Aviation covers a wide variety of space-based air control advancements, using the Next Generation (NextGen) Air Transportation System being developed by the Federal Aviation Administration (FAA), NASA, the Department of Defense, other government agencies, and industry partners as a prime example. The cornerstone of NextGen, which is being introduced throughout the U.S. over the next decade, is a satellite-based technology appropriately named Automatic Dependent Surveillance-Broadcast (ADS-B) that:

This system has broad-reaching features that significantly contribute to improvements in safety, efficiency, and environmental impact, all of which are outlined in Solutions from Space: Faster, Safer, Greener Commercial Aviation.

In addition to an overview of satellite-based air management improvements, the paper also makes recommendations to both industry and government on how these technologies can be even better used and even more rapidly deployed.