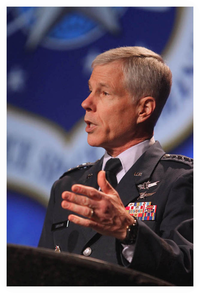 Saying that although he didn’t expect any budget relief, Shelton said he still must meet the requirement to provide – via the National Command Authority – protected communications for national and nuclear command and control capability. “Wideband communications is our lifeline, absolutely our lifeline to deployed forces around the world, as well as to our diplomatic corps around the world,” he said. “In this era of information-enabled warfare, there’s no question that wideband satellite communications will continue to play a central role.”

He said that Air Force Space Command must provide missile warning, missile defense, theater warning (“telling our troops when to duck”) and, with increasing capabilities on a space-based infrared system, battlespace awareness and technical intelligence. “As we refine our IR sensors from space, there is no question that there will be more demand for this capability, not less,” he said.

Calling GPS “the gold standard” for position, navigation and timing capability, Shelton reminded the audience that the Air Force provides the service for free for civil, military and commercial. He said that the roughly $110 billion industry fuels more than 500 million cell phones and that the timing signal and positioning and navigation capabilities enable precision warfare. “Everything we do employing weapons seems to somehow involve GPS.”

He also referenced the Air Force’ s morning orbit responsibility for weather satellites, assumed after the recent breakup of the NPOESS program, noting that weather prediction is essential for warfighters and civilian counterparts.

Commenting on the growing complexity of space situational awareness as the number of objects and the amount of debris in space accelerates, Shelton said better capabilities are needed in the Joint Space Operations Center. He said that a recent independent assessment found some structural difficulties in the program, and Air Force Space Command has pulled back or suspended response to some RFPs until the results are thoroughly examined. He also said that it is necessary to restore confidence in Space Command’s ability to produce on schedule and on cost and that, above all, mission assurance has to come first.

Shelton also said that it is necessary to restore confidence in Space Command’s ability to produce on schedule and on cost and that, above all, mission assurance has to come first.

From a technical point of view, Shelton called for a fault-tolerant architecture for the future that provides resiliency. He posed a number of potential ideas to consider:

In discussing budgets, Shelton said, “We tried better, cheaper, faster and found that you could have two of the three, but you couldn’t have all three.”  But, he added, neither “getting government out of the way” nor relying exclusively on government can provide all the answers – any likely solution will involve a balance of private and public sector solutions.