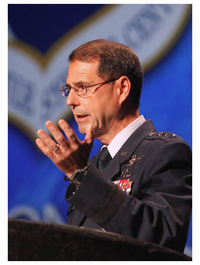 Sheridan said that an acquisition improvement program is helping in some areas, but there is still more work to be done.

He also talked briefly about the history of using space assets to support warfighters, saying that the use of weather data in Vietnam was the first tactical use of space data and that GPS is a global utility today that provides critical timing and navigation information. Sheridan said that the first Advanced Extremely High Frequency (AEHF) satellite launched from the Cape last August will ultimately replace the MilStar constellation and that the Space Based Space Surveillance (SBSS) system satellite launched last year recently finished on-orbit developmental testing and evaluation (DT&E) and is anticipated to be fully operational by June.