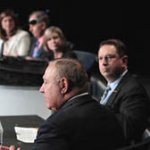 Dr. Thomas J. Bogdan, president, University Corporation for Atmospheric Research (UCAR): Although the U.S. has the strongest EO system in the world, it is facing gaps as the systems age. Innovation is the solution. Severe weather caused about $50 billion in damage in the U.S. in 2011, yet EO systems are a bargain in comparison. Unmanned Aerial Vehicles (UAVs) are a solution for weather monitoring and there is movement from seasonal to interannual weather prediction.

Lynn A. Dugle, vice president, Raytheon Company, and president, Raytheon Intelligence and Information Systems: There are three pieces to decision-making: timely capture and delivery of data, adequate coverage with multiple sensors and analytics. The industry must take increased ownership of cost-reduction measures, as well as advocate for EO systems.

Rob Mitrevski, vice president & general manager – intelligence, surveillance & reconnaissance systems, ITT Exelis: There is alignment between challenges and opportunities, but budget cuts will create a need for alternatives to large programs. Transition from cost-plus to fixed price contracts will be as a benefit to the industry. For commercial weather observation, the difficulties in monetizing previously free data could be overcome by individualized services to add value.

Gen. Chuck Wald, USAF, Ret., director, Deloitte Services, LP: There are new paradigms and priorities in Earth observation (EO), particularly in intelligence, surveillance and reconnaissance. We can anticipate issues in areas that are being destabilized by climate change.  Issues must be communicated better to people outside the space community, which include decision-makers.