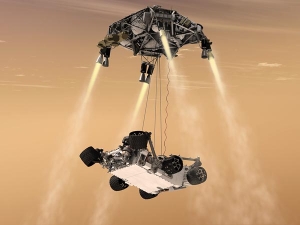 The landing beside a mountain inside a crater will use a new “sky crane” maneuver that lowers the 1-ton rover by nylon cords from a rocket backpack to the Martian surface. In the parlance of Olympic gymnastics, it will be crucial for Curiosity to “stick” its seven-minute landing, keeping complex and sensitive equipment intact. The new landing system was necessary because, with a science payload weighing 15 times as much as the science instruments on previous Mars rovers, Curiosity is too heavy for the airbag system used for other rovers.

By the time it reaches the edge of the Martian atmosphere, Curiosity will have traveled 352 million miles in its nine-month trip from Earth. It is the largest rover ever sent to another planet.

NASA will use the Mars Odyssey orbiter, in service since 2001, as a relay for rapidly confirming the nail-biting landing to Curiosity’s flight team and the rest of the world. Earth will be below the Mars horizon from Curiosity’s perspective, preventing direct radio contact with Earth. Two newer orbiters also will record Curiosity’s transmissions, but that data will not be available until hours later. 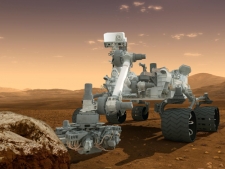 Curiosity’s two-year prime mission is to determine the red planet’s habitability by studying Martian climate and geology and by collecting data for future human missions to Mars.

The rover, which was developed and is managed by the Jet Propulsion Laboratory (JPL) of California Institute of Technology in Pasadena, Calif., contains the most advanced robotic cameras ever sent to Mars and should produce never-before-seen images of the red planet.

Curiosity’s assignment includes investigating whether its 12 by 4-mile study area has ever offered environmental conditions favorable for microbial life. The landing target sits in a flat area between slopes of the rim of Gale Crater and the crater’s central peak, informally called Mount Sharp. The target was plotted to be within driving distance of layers on Mount Sharp, where minerals that formed in water have been seen from orbit. The landing site is pictured, left.

There are many ways you can participate in curiosity’s landing:

What to Know More?