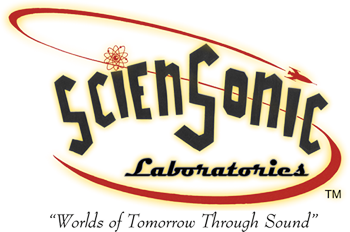 “I feel that we’ve found the ideal partner in the Space Foundation,” said Scott Robinson, head of sonic research for ScienSonic Laboratories. “They do very important work, and I give them a lot of credit for putting a value on imagination and creativity, in addition to the hard science. After all, Einstein said that imagination is more important than knowledge.”

About ScienSonic Laboratories
ScienSonic Laboratories, LLC, is more than a record label and recording facility; it is more accurately a resource for the adventurous listener. Through its CD and LP releases, the creative listener can discover unique “Worlds of Tomorrow Through Sound,” such as a trio of bass saxophones, vintage electronics played through rotating speakers, bass marimba duets, a miniature symphony for contrabass sax and seven-foot banjo and a solo multi-instrumental performance based on doctoral work in chaos theory. Musicians who have recorded for ScienSonic include some of the most original and distinctive in creative music today: Marshall Allen, Kevin Norton, Vinny Golia, Henry Grimes, Julian Thayer, J.D. Parran, Pat O’Leary, Warren Smith, Frank Kimbrough, Emil Viklicky and Scott Robinson.

ScienSonic Laboratories music is recorded under union contract with the American Federation of Musicians and its CDs are manufactured in the U.S. In keeping with its expansive mission, a percentage of each album sold will be donated to the Space Foundation for the advancement of space exploration.

For more about Space Certification, go to www.spacefoundation.org/space-certification.