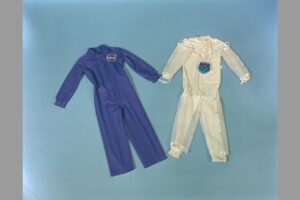 One of the potential hazards confronted by astronauts is the shifting of bodily fluids that occur as a result of changing gravity levels. During the Apollo program, NASA’s Ames Research Center began conducting research on the use of pilot anti-G suits for possible astronaut use. These anti-G suits were developed for pilots of high-performance aircraft who experienced rapid gravity changes.

A key component of the suits is trousers that contain pneumatic bladders to counteract the fluid shifts. The development efforts of the Ames researchers successfully produced protection suits that have been incorporated into astronaut gear. In 1975, Ames produced a special-purpose inflatable garment and pressure controller. The suit was tested at Stanford Medical Center. In 1979, an editorial published in a medical journal described the use and value of this suit in controlling intra-abdominal bleeding or shock. Following numerous inquiries and requests for suits, Ames transferred the technology to many medical suppliers. Several companies now manufacture products that incorporate the NASA technology.

Most states require ambulances to carry anti-shock garments. Paramedic use of these garments can reverse the effect of shock on the body’s blood distribution. In shock, the brain, heart, and lungs may suffer loss of oxygen because blood accumulates in the lower abdomen and legs; the anti-shock garment applies external counter pressure to the legs and abdomen and returns blood to the vital organs, stabilizing body pressure until the patient reaches a hospital.