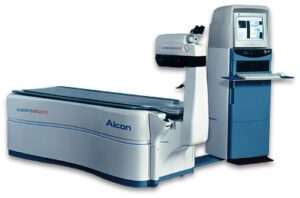 More and more people are now leading lives without eyeglasses or contact lenses thanks to laser vision correction surgery. Laser-Assisted In Situ Keratomileusis or LASIK, the most common form of laser vision correction is the most widely performed, elective procedure. The LADARVision(R) 4000 laser uses an eye-tracking device to ensure accurate reshaping of the cornea. This tracking system is based on technology originally developed for NASA to assist spacecraft in delicate docking maneuvers. This space-based technology now enables LASIK to provide unmatched precision in reshaping the cornea.

During LASIK surgery, laser pulses must be accurately placed which requires eye tracking measurements to be made at a minimum rate of 1,000 times per second to keep up with eye movements. Laser latency, which plagues other systems is not a problem for Alcon’s patented LADARTracker(TM), which measures eye movements at 4,000 times per second, four times the perceived safety margin. LADARTracker is also the only closed-loop system in clinical practice that can lock onto the eye at all times during the procedure. As a result, the LADARVision 4000 is the only laser to have obtained FDA claims that the tracking device “improves the accuracy of corneal shaping.”

Most recently, the LADARVision(R) system, consisting of the LADARVision 4000 and the LADARWave wavefront measurement device, became the first to gain FDA approval for wavefront-guided LASIK. The resulting procedure, called CustomCornea(R), now allows surgeons to measure and address visual distortions that previously went undetected. The LADARVision system was designed from the ground up with this breakthrough wavefront technology in mind. The accuracy of the LADARTracker is of paramount importance in the delivery of intricate customized laser treatments.