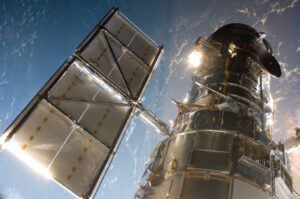 The ability to see faint objects, such as distant galaxies, is a critical element of the Hubble Space Telescope’s mission. NASA researchers found that available technology could not meet Hubble’s stringent requirements. A joint development effort between NASA and Scientific Imaging Technologies, Inc. (SITe) developed a new charged coupled device technology fulfilling the rigorous needs. The new technology was ideal for application to breast cancer detection because of common requirements between space and medical imaging, such as high resolution to see fine details, wide dynamic range and low light sensitivity to shorten exposure time.

The stereotactic breast biopsy system incorporates the charged coupled technology as the key component of a digital camera system that scans the breast structure with x-rays. The system images suspicious breast tissue more clearly and efficiently, and saves women time and money; reduces pain and radiation exposure; and eliminates the scarring of more invasive techniques. With more than 500,000 women undergoing breast biopsies each year, the system dramatically reduces annual health care costs. The system that first made possible this new technique is the LORAD Stereo Guide Breast Biopsy System, which incorporates SITe’s CCD as part of its digital camera system.

The technology breakthrough that spawned the LORAD system originated at NASA’s Goddard Space Flight Center, where scientists had developed the Space Telescope Imaging Spectrograph, now installed on the Hubble. The Hubble-derived CCD is now leading the field of digital breast imaging with radiologists predicting the new technique will reduce national health care costs by more than $1 billion a year.