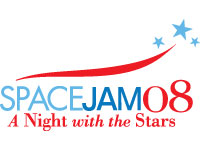 The Space Foundation, in partnership with multiple corporate and nonprofit sponsors and supporters, hosted Space Jam 2008: A Night with the Stars, an educational reception at each political convention. With magnificent museums serving as backdrops, Space Jam 2008 featured interactive exhibits, stargazing with local astronomers, and discussions with former astronauts.  Attendees had the opportunity to learn about the Earth from space, space exploration, and space technologies from planetarium shows, telescope observations and demonstrations, and informative exhibits representing all aspects of the space industry.  In addition, numerous former astronauts attended the event and interacted with guests, sharing their experiences in space.

Space Jam 2008 took place on Aug. 25 at the Denver Museum of Nature and Science in Denver, Colo., during the Democratic National Convention. Colorado Lt. Governor Barbara O’Brian welcomed participants and Congressman “Dutch” Ruppersberger made brief remarks as part of the evening’s activities.

During the Republican National Convention, Space Jam 2008 took place at the Minnesota History Center in St. Paul, Minn., on Sept. 1.

August also saw the Congress on recess, with Members returning to their home districts. As the 2008 election year approaches and the tempo of the presidential campaign increases, Congress will return in early September facing a compressed calendar and increased pressure to move forward on several critical issues. This promises to affect the ability to pass individual spending bills, remaining authorization bills, and other priority legislation through both the House and the Senate before the current session concludes.