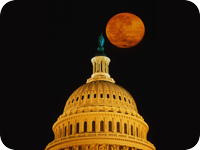 On May 6, the Space Foundation hosted a Space Foundation Correspondents Group breakfast with Gen. C. Robert Kehler, USAF, commander, Air Force Space Command. Speaking with about a dozen reporters, Gen. Kehler said that the United States is working to update its Cold War-era space situational awareness (SSA) system, a need made more urgent by the recent unexpected collision between an active Iridium satellite and an inactive Russian satellite. He also touched on the impact of the FY10 budget on USAF space programs and how the Air Force and the Department of Defense (DoD) are looking at new ways to approach acquisition. For a complete overview, see related article in Space Watch.

May was a busy month in Washington, with the President issuing his first full budget request for fiscal year (FY) 2010 in the first week. Congress began budget posture hearings for federal agencies quickly, with both the House and the Senate authorizers and appropriators holding hearings on both the Department of Defense and NASA’s FY10 budgets. The White House simultaneous with the release of the NASA budget, appointed Norman R. Augustine to head a blue-ribbon panel reviewing NASA’s human spaceflight program. This commission is set to complete its review by the fall.

Both the House and Senate also looked at military space programs in the context of the FY10 budget, with discussion focused around sustaining critical constellations such as GPS, the cancellation of the Transformational Satellite System (TSAT) program, and plans for protected communications, increasing our space situational awareness, and investment in programs like Operationally Responsive Space (ORS).

The House of Representatives is currently considering a new Department of State Authorization bill. Of note to those in the space community is a provision in that allows the president to remove satellite and satellite-related components from the United States Munitions List (USML). The legislation also calls for a continuous review of the USML in the future to enable the USML to stay current with prevailing global technology standards. It is unclear when the entire House of Representatives will consider action on this legislation.

Over the Memorial Day Weekend, the White House nominated Charles Bolden to become NASA administrator and Lori Garver to be Deputy Administrator (see related article in Space Watch). It is hoped that Senate confirmation will be soon.

Ashley Whelan, Manager of Government Affairs for the Space Foundation, participated in a panel discussion on Advocating for Your Interests at the 2009 International Space Development Conference held May 28-30 in Orlando, Fla. Moderated by Darcie Brooks, associate director of government relations for Orbital Sciences Corp., the panelists talked about how organizations advocate their positions, especially Congress. In addition to Whelan, the panel included: Pam Gillespie, district office manager for Fla. Rep. Bill Posey; and Samantha Segall, who handles business development in the Advanced Science and Engineering group for SAIC and is a former lobbyist for United Space Alliance. The discussion covered the congressional process – chambers and committees; the authorization vs. appropriation process; guidelines for meeting with representatives and staff; how non-profits fit into the mix; how to identify your representative or the appropriate staffer; the importance of building relationships; and the importance of providing relevant information to the office. Whelan’s participation centered on raising awareness about space so that when constituents or lobbyists go into an office, there is a basic understanding of the space industry.