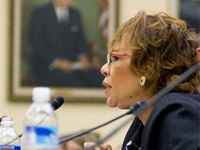 Space “is the bedrock of America’s economic and strategic power,” but the U.S. government needs to improve the acquisition of space systems in order to maximize the benefits of space investment.

This was part of the feedback Space Foundation Board member Patti Grace Smith gave to the House Committee on Science and Technology’s Subcommittee on Space and Aeronautics when she testified at a July 16 congressional hearing titled “Enhancing the Relevance of Space to Address National Needs.”

Speaking on behalf of the Space Foundation, Smith commended President Obama on “his decision to review the entire U.S. space policy” and said that she feels that “most of our space activities are pretty well aligned with our national goals and objectives.

“Whether decision makers realize it or not, many of our goals and objectives depend on, and are enabled by, space assets,” she continued, but added that space systems “should be developed faster and with more management discipline” because “we all know of space systems that have been over budget and behind schedule.”

“Currently we are facing a number of gaps across the entire range of the civilian and national security space systems,” said Smith, citing human spaceflight, solar radiation detection, next-generation GPS systems, missile warning systems, and climate and weather monitoring. “There are, or soon will be, gaps in coverage and capability that will hamper our ability to derive benefits from space,” she said. “These gaps will also force us to be reliant on foreign space systems … it is beyond a coincidence that we are seeing such a systemic gap problem in so many areas. Once we get back to better management of space systems, we can deploy more systems more often and accrue more benefits from them.

“We need to modernize the export control regime to allow U.S. space companies to compete effectively in the global marketplace,” Smith continued. “This is one area in which the U.S. already generates a positive trade balance, but it could be significantly larger and would provide more funds for U.S. companies to develop new jobs and innovations that help both the domestic space industry and the broader U.S. economy. The Space Report 2009 shows that the commercial sector now makes up 68 percent of the global space economy, so regulatory changes have the potential to generate considerably more R&D funds than direct investment by the government.”

Smith made other references to The Space Report, as the “snapshot of the global space economy,” and provided background on the Space Foundation.

« Read Them All: Apollo 11 Stories Tell of Hope, Inspiration, Awe and Pride