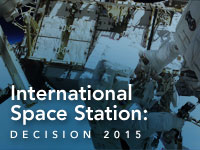 COLORADO SPRINGS, Colo. (Oct. 21, 2009) — The Space Foundation today strongly recommended that the United States keep the International Space Station (ISS) functioning until at least 2020 and beyond, if possible.

The recommendation is the key message of a Space Foundation white paper, The International Space Station: Decision 2015, that argues for continued U.S. involvement to further scientific study, maintain positive international collaboration, and significantly improve the nation’s space-related return on investment. “To abandon the International Space Station now that it is just becoming fully functional would be illogical and unwise from both scientific and political perspectives,” said Space Foundation Chief Executive Officer Elliot Pulham. “In the more than two decades we’ve taken to create this marvel of engineering and international cooperation, we’ve reaped tremendous rewards. But,” he continued, “I believe we’re just now on the cusp of understanding the real value of this endeavor.”

The U.S. is considering wrapping up its ISS involvement in 2015 and letting the $100 billion orbiting laboratory re-enter the Earth’s atmosphere and burn up in 2016. The ISS is both the largest and the most collaborative human-made object ever to orbit the Earth. Fifteen countries are involved in the project, 11 of which have operations centers. To date, ISS education programs have reached more than 31 million U.S. students.

The first module of the ISS was launched in 1998, with multiple missions adding to the station over the years. ISS laboratory and research space tripled in 2008 with the addition of the European Space Agency’s Columbus module and the Japan Aerospace Exploration Agency’s Kibo module. Construction is scheduled to be completed in 2010, after which the cost of continuing operations should be relatively low, while the potential benefits to be gained from onboard research and development will be higher than at any previous time. The U.S. initiated the ISS program and continues to manage assembly, servicing, operation, resupply, and most astronaut training for the station program.

“If the U.S. allows ISS leadership to lapse, it will likely fuel negative international perceptions about our leadership, our reliability as an international partner, and our commitment to scientific and technical endeavors,” said Pulham.

Rationale for Recommendation
The International Space Station: Decision 2015 provides a strong argument for keeping the ISS operating, stating that lengthening ISS’ lifespan will benefit the U.S. by:

“Beyond recommending continued involvement,” said Pulham, “the Space Foundation believes that we must maintain a comprehensive research agenda with participation from government agencies, academic institutions, and commercial enterprises, using the phenomenal resources available aboard this orbiting international laboratory.” Many research projects are directed at Earth-based issues, such as disease prevention or alternate energy sources, in addition to research that supports space exploration. Plus, the ISS is the only existing platform that allows long-term, tended research in microgravity conditions.

Space Foundation Recommendation Consistent with Findings of Special Commission
The Space Foundation’s recommendation to keep the ISS functioning until at least 2020 is supported by findings in the Executive Summary of the Review of U.S. Human Space Flight Plans Committee Report, which was released in September in advance of a full report expected shortly. The Committee, chaired by retired Lockheed Martin CEO Norm Augustine, was established by the Obama administration to evaluate U.S. human space flight programs and develop alternatives to ensure that future human space flight plans are safe, innovative, affordable, and sustainable.

The Executive Summary noted that, “The Committee finds that the return on investment of ISS to both the United States and the international partners would be significantly enhanced by an extension of ISS life to 2020. It seems unwise to de-orbit the Station after 25 years of assembly and only five years of operational life.”

Commenting on the potential impact of abandoning the ISS to international relationships, the Executive Summary said, “The strong and tested working relationship among international partners is perhaps the most important outcome of the ISS program … Not to extend its operation would significantly impair U.S. ability to develop and lead future international spaceflight partnerships.”

The Committee also agrees with the need for additional research, saying in the Executive Summary report, “Now that the ISS is nearly completed and is staffed by a full crew of six, its future success will depend on how well it is used. Up to now, the focus has been on assembling ISS, and this has come at the expense of using the Station. Utilization should have first priority in the years ahead.”

Read the Full White Paper
To read The International Space Station: Decision 2015 or download a copy, go to www.SpaceFoundation.org/research. The paper includes more detail on the Space Foundation’s recommendations and a comprehensive history of the ISS.