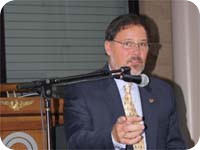 Students at Pikes Peak Community College in Colorado Springs, Colo., got an overview of future space travel and an update on the international space community from Space Foundation Chief Executive Officer Elliot Pulham, in a presentation that was part of a series of All Pikes Peak Reads space events this fall. The students traveled vicariously behind the scenes of China’s manned spaceflight program when Pulham shared stories of his recent travels there, and heard that the U.S. space program is not what it once was.

“One misconception is that we are the be-all and end-all in space, and that no other country can do what we can,” said Pulham. “We have more capabilities that any other nation and we’re the best at many things. But, we are not the best at everything.”

Commenting on U.S. regulations that are designed to safeguard technological advancements, but instead significantly restrict U.S. companies’ ability to compete in the world space arena or collaborate with other nations, Pulham said, “We’re kidding ourselves if we think other countries don’t have the technology we do.”

He pointed out that NASA’s budget has been declining for almost 40 years, stating that without an infusion of additional funding, there is little hope that NASA can build a meaningful program. He added that much of the future of the U.S. space program can be found in commercial space ventures, private space travel, and collaboration with the space programs of countries such as India, China, and Russia.

Pulham talked with the students about the Space Foundation delegation that toured China’s manned spaceflight program in September. He compared what he saw with the early days of the U.S. Apollo space program. “Their facilities were new, clean, and state-of-the-art,” said Pulham. “And in three or four missions the Chinese have accomplished what we accomplished in 12 to 15 missions.”

But there’s good news, “The Chinese are more interested in working with us than competing against us,” said Pulham.

There was more good news for the students when Pulham described the job outlook for space-related jobs, specifically engineers. He said increasing commercial space business will create demand for a variety of positions, including business managers, attorneys, and marketing majors, but the greatest demand will be for engineers. However, he said the U.S. is not keeping up with other countries in educating students to fill those positions.

“We can use a natural interest in space as a platform to teach any subject,” he said.

Read more about Space Foundation education programs here and the Space Foundation delegation trip to China here. More information on the state of science, technology, engineering and mathematics education can be found in The Space Report 2009: The Authoritative Guide to Global Space Activity.