U.S. Losing Its Lead in Space 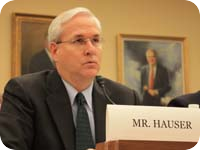 Marty Hauser, Space Foundation vice president for Washington operations, research and analysis (pictured), represented the organization at a Congressional hearing Nov. 19, hosted by the House of Representatives Committee on Science and Technology Subcommittee on Space and Aeronautics.

Hauser provided members of Congress with insight into the growing trend of international space capabilities, the important impact of that growth, and the issues Congress should address as it decides the future direction of the United States space program. He warned that the U.S. is rapidly losing a leadership position in space, and he described China’s “state-of-the-art” rocket launch facilities.

“Others are catching up fast,” he said. “Of particular note over the past decade is the emergence of China’s human spaceflight capabilities.”

Major themes discussed at the hearing were:

Hauser also took the opportunity to discuss the Space Foundation education programs, its partnership with Charles County (Md.) Public Schools, space networking events hosted by the Space Foundation, such as the National Space Symposium, and The Space Report 2009: The Authoritative Guide to Global Space Activity.

Attending members of Congress seemed to agree with many of the concerns raised regarding affects to the U.S. industrial base, lack of stability in civil space programs, ITAR restrictions, and the need for greater cooperation with international partners.