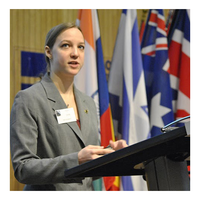 Each year, the International Space University (ISU) organizes a three-day symposium addressing a topical theme from an interdisciplinary and international perspective. These symposia attract audiences of around 200 members of the space sector from agencies, industry and academia worldwide. The theme of this year’s 15th ISU Annual International Symposium was “The International Space Station: Maximizing the Return from Extended Operations,” and was held Feb. 15-17 at the ISU central campus in Strasbourg.

Space Foundation research analyst Mariel John gave a presentation entitled “Political Evolution of the International Space Station: Prospects for Future Success,” examining the evolution of the International Space Station (ISS), including major developments and the political challenges it has faced over time. These include important political milestones, such as President Reagan’s announcement of the program, the budget cuts and policy debates that occurred in the late 1980s, the near cancelation of the station program in 1993, the decision to include Russia in the partnership and the role of the ISS in the “Vision for Space Exploration.” It also addressed more recent policy changes, such as the discussion of the ISS in the Augustine Report, President Obama’s FY2011 Budget Request and the NASA FY2011 Authorization Bill.

According to John, continued utilization of the International Space Station will depend on continued political support. “Throughout its development, political support for the ISS has been based not on one primary benefit, but on a wide variety of benefit areas,” she said. “Continued success will depend on how these various benefits are recognized and supported by future policy.”

About ISU
ISU provides graduate-level training to the future leaders of the emerging global space community at its Central Campus in Strasbourg and at locations around the world. Its two-month Space Studies Program and one-year Masters program offer students a core curriculum covering all disciplines related to space programs and enterprises: space science, space engineering, systems engineering, space policy and law, business and management, and space and society. Both programs include an intense team research project that provides international graduate students and young space professionals the opportunity to solve complex projects by working together in an intercultural environment. Since its founding in 1987, ISU has graduated more than 3,000 students from 100 countries. ISU is a strategic partner of the Space Foundation. For more information, click here.