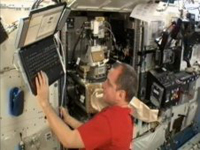 What happens when electronics overheat? The short answer is: nothing good. In microgravity, natural convection does not occur, which makes cooling equipment a challenge. So how do you keep electronic and computer components from overheating in space — especially on non-rotating satellites where one side is constantly exposed to extreme solar temperatures and one side freezes in constant shadow?

You use an invention that was inducted into the Space Foundation’s Space Technology Hall of Fame® in 1990 and is still the primary way to maintain safe temperatures on satellites used for communications, global positioning systems and defense purposes.

The heat pipe is the device used to regulate temperature and keep the overall systems operating reliably. Developed by Los Alamos National Laboratory, this simple passive device efficiently transfers heat from a hot spot to a cooler remote location without using a mechanical pump or consuming any external energy.

NASA Looking for More Data for Potential Human Space Flight Applications
To further insights into the operation of a heat pipe in space, scientists recently launched an investigation called the Constrained Vapor Bubble (CVB) on the International Space Station (ISS). One of the goals of the experiment is to look at the feasibility of using heat pipe technology for regulating temperatures on manned vehicles.

The CVB is the prototype for a wickless heat pipe and is the first full-scale fluids study in the Fluids Integrated Rack (FIR) facility flown on the U.S. module of the ISS. The experiment was completed on March 1, 2011, when the crew removed the fourth module for return on Space Shuttle mission STS-135.

A heat pipe is usually a sealed tube in which all the air is removed and a small amount of liquid is introduced under a partial vacuum. A portion of the liquid in contact with a hot surface evaporates into a vapor as it absorbs heat from the hot surface. The vapor condenses back to a liquid when the vapor comes in contact with a cool surface, thus releasing its stored or latent heat to the cold surface. The liquid then draws back toward the hot surface, due to the interaction of the individual liquid molecules and their attraction to the surface of the container – a process called capillary action. The whole liquid and vapor cycle requires no moving parts and the heat transfer process can repeat indefinitely.

Nearly all heat pipes contain wicks or grooves that enhance capillary action and promote the pumping of the working liquid from the cool liquid pool back to the hot surface where the liquid can evaporate again.

“The wicks or grooves are complex to fabricate inside the tube and add weight to the heat pipe. Heat pipes built without wicks hold open the possibility of significant weight savings for space flight,” said CVB Project Manager Ronald Sicker of NASA’s Glenn Research Center in Cleveland, Ohio.

The CVB experiment uses a rectangular-shaped glass tube made of quartz called a cuvette pipe, filled with a fluid called pentane. This design allows for highly accurate temperature measurement and enables scientists to observe the fluid flow so that they can measure the size and shape of the menisci – the shape of the fluid as it climbs the interior walls of the cuvette.

CVB heat pipes were operated on Earth and then launched into space and operated in the microgravity environment of the ISS.

“Heat pipes operate at a considerably higher temperature and pressure in microgravity than they do on Earth,” said CVB Principal Investigator Joel Plawsky of Rensselaer Polytechnic Institute in Troy, N.Y. “In microgravity, there is no gravity-driven natural convection to help cool the heat pipe surface. The only way heat pipes can lose heat in space is to radiate that heat directly to the environment.”

The CVB investigation will increase understanding of the basic principles of heat transfer and help improve efficiency of the cooling equipment.

“The heat pipes offer the potential for ultra-reliable heat transfer, since they contain no moving parts that can eventually wear out and fail,” said Plawsky. “However, their scope and scale would have to be greatly expanded and the risks of using them in microgravity better understood if we are to eventually use heat pipes as a primary heat transfer technology on long-term manned missions.”

The FIR also contains the Light Microscopy Module (LMM), which is a completely automated optical microscope that can be controlled from Earth and allows for visually recording the changes taking place within the CVB, including the liquid levels and the changes in the bubble of pentane vapor.

“The data we collect and analyze will also help solve fundamental problems in the fields of boiling, evaporation, condensation, adsorption and evaporative self-assembly,” added Plawsky. “The experiment will benefit a whole host of technologies on Earth ranging from conventional air conditioning/refrigeration systems and devices to cool microelectronics to the fabrication of self-assembled systems such as photonic crystals.”

Heat Pipe Already has Significant on Earth Applications
As noted in the heat pipe technology induction into the Space Technology Hall of Fame® over a decade ago, one of the earliest and best known commercial applications of the technology was for protection of the Trans-Alaska Pipeline System, thus addressing how to keep it from sinking into the permafrost. Subsequently, Kennedy Space Center sponsored a number of studies with the objective of developing additional commercial applications. Heat pipes are now regularly used to enhance the dehumidification performance of conventional air conditioners and they are used in warehouses and supermarkets where controlled temperatures and humidity are needed to preserve perishable product quality. Significant energy savings are found in both these applications. Additionally, heat pipe technology can be found in solar heating systems, in the cooling of notebook computer processors and in heaterless injection molding for plastics manufacturing.

To see more on the inductees, including recognized individuals, click here.

About the Space Technology Hall of Fame®
The Space Technology Hall of Fame® was created in 1988 by the Space Foundation, in cooperation with NASA, to increase public awareness of the benefits resulting from space exploration programs and to encourage further innovation. To date, the Space Foundation has inducted 65 technologies as well as honoring the organizations and individuals who transformed space technology into commercial products that improve the quality of life for all humanity.