He says the book shows how baby boomers growing up with the startling discoveries in science of the 1960s and 1970s came to have so much confidence in science and technology.

“We really have confidence that diseases can be cured – that the crises that we encounter as doctors and in the case of the book, as parents sometimes, that science is there for us,” Ledley says, “… when a child has a malady, we can do more than watch them and pray for them – we can look for cures.”

Faith and Science
His recently published book looks at the intersection of science and faith, tracing the life of the fictional Jackie – born in 1957 on the day Sputnik was launched – and her crisis of faith when her daughter is diagnosed with an incurable disease.

Ledley, chair of the natural and applied sciences department at Bentley University, a business school in Massachusetts, trained in pediatrics at Harvard after graduating from Georgetown medical school.

He went on to treat children with genetic disorders and to create a number of startup biotechnology companies, joining Bentley six years ago after feeling “lost from academia.” 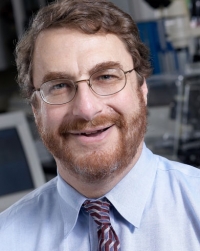 Scientific Legacy
The author is donating profits from the book to the Space Foundation, a global nonprofit advocating space awareness and education.

Ledley is the son of School of Medicine emeritus professor Robert Ledley, who in the 1970s invented the first whole-body CT (computerized tomographic) diagnostic X-ray scanner.

“My father loved science, and he was privileged in his career to have an opportunity to go into worlds that were so unknown at the time,” Ledley says. “He was one of the first people who had the pleasure of thinking about how computers could be applied to healing.”

He treated children’s genetic diseases with gene therapy at the Howard Hughes Medical Institute, then went on to serve as vice president of GeneMedicine, a biotechnology company that produces pharmaceuticals through gene therapy. Other startup companies followed.

“Our research suggests that this in so many ways is a golden age of science,” Ledley says. “And when scientists try to get their technologies out there, it’s so important to society that we figure out how to make this more efficient.”

Maximizing Benefits
The idea of maximizing the benefit of scientific discovery also plays into Sputnik’s Child, in which the protagonist raises money for a science lab to develop a cure for her ailing child.

In real life, he says developing new medications is difficult.

This is why he believes working hard to increase the chances of a drug’s success is so important.

“There’s so much potential in the human genome and science associated with that,” he says, “and yet it remains very hard to translate basic science that helps people day-to-day. That’s the story of the book.”

« Canada to Invest in WGS