Space and cyberspace intersect at the Space Foundation national conference, Cyber 1.3, to be held on Monday, April 8, at The Broadmoor Hotel in Colorado Springs, Colo. The full-day conference takes place immediately before the official opening of the 29th National Space Symposium.

Cyber 1.3 is for anyone with an interest in, or responsibilities related to, the cyber domain, whether government policymaker, industry executive or military cyber professional/practitioner at any level. The unique interagency and cross program approach to this year’s cyber conference promises stimulating discussions and networking opportunities unmatched in our industry. 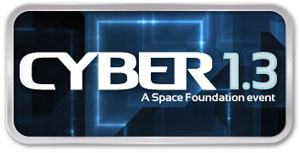 Here are descriptions of three of the six panel discussions to be featured at Cyber 1.3:

Digital Natives and Their Solutions
Featuring panelist Col. Robert Garland, commandant, U.S. Air Force Weapons School
Cyber has become increasingly vital to how the nation conducts not just the day-to-day operations of all Americans, but essential to how the nation defends itself. Many intelligent men and women who grew up with computers and video games as daily life are now adults and seek a meaningful profession; we feel the cyber domain should be something they seriously consider. It is also vital to our national security to be able to attract, train and retain these individuals.

Humans Wanted? Humans Needed? The Future of Cyber
More than 60 years ago humans began developing computers and then later, the ability for computers to network. Fast forward to now and countless cyber activities take place at the speed of light every second around the globe. Those who are charged with detecting, protecting and responding to negative cyber activity are finding the battle space increasingly crowded and increasingly active. Humans are now depending more and more on computers to help them make informed decisions on cyber and counter-cyber actions. Should humans be “in the loop” for timely decisions on handling cyber security threats in real-time? Can humans even be expected to cope with this blinding digital vortex?

Cyber Pearl Harbor: Who-What-How?
With offensive cyber and counter-cyber security activities seemingly to escalate daily, many expect this trend to build until an enemy of the United States feels it is the capability to execute a large scale cyber “attack” that will cripple both military and civilian infrastructure. Some are concerned that the U.S. may not be able to detect, thwart and respond to such a cyber offensive which would leave the U.S. vulnerable to other, possibly more conventional offensive efforts. Visions of a “Cyber Pearl Harbor” are forcing decision makers to take steps to avoid such a calamity.

Register Now
Register now for Cyber 1.3 at www.nationalspacesymposium.org/register. The rate for active military/government personnel is $395 for the one-day conference; the standard industry rate is $495, which can be combined with Space Symposium registration for additional savings.