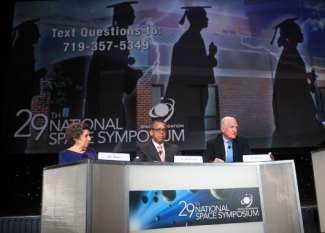 The panel began with Barrett  (pictured, top right) addressing how the America Competes Act is up for re-authorization in 2013. He asked, “If the U.S. spends so much on K-12 education, why do we do so poorly?”

Washington responded by saying he does not see national security and the educational landscape as mutually exclusive, and that the latter prepares the experts in science and engineering required for the former.

Rosen’s reply was, “Our progress is not commensurate with our effort. Changes have been made, but not enough. Other countries are doing more.” (Rosen is pictured, middle right)

She noted the problem of districts and states being wedded to convention and resistant to change, and how, “We’re paying to teach kids the same things twice. Return on investment varies widely per proficient student.”

Rosen discussed initiatives meant to set high expectations for students and schools, such as the Common Core Standards. Washington, however, tended to focus more on efforts to inspire students.

“If you don’t capture the imagination of a young person by the 4th grade for a STEM career, then the battle is lost. Supporting students is the responsibility of society and every person, not just lawmakers,” he said.

When the audience asked what teaching-to-a-test accomplishes, Rosen said that such teaching establishes an “intellectual spine” that gives students the necessary toolset, like critical thinking, to succeed.

Rosen and Washington (pictured, bottom right) agreed that systems need to be in place to monitor alternative education systems like charter schools, but that districts and states could look to successful ones to guide their leadership. Rosen also mentioned a need to create better growth potential for K-12 educators.

Additionally, Rosen and Washington noted that everyone needs to do their part to make STEM education and careers exciting. Rosen pointed to www.ionfuture.org, a game-based learning environment that profiles 100 STEM careers.

Washington closed by iterating the importance of STEM and emphasizing the burden is on everyone’s shoulders. “A strong education in math and science will serve students in almost any career they chose,” he said. “If you’re not mentoring at least three young people, then you’re missing an opportunity to affect the future. Everyone is a game changer.”

See video of the discussion here.

See photos of the panel here.

« "Dutch" Ruppersberger Talks about Benefits of Space, Dangers of Sequestration