In March, the Space Foundation issued a statement supporting the Administration’s FY15 budget proposal for NASA, calling the budget proposal a “balanced approach to sustaining key NASA programs and capabilities, while increasing emphasis on next generation capabilities — within a budget constrained environment.” 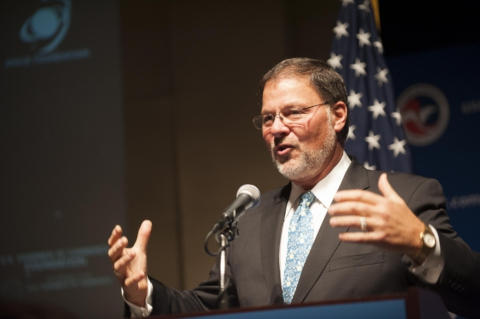 “With NASA’s budget at a historic low as a percentage of the federal budget, we strongly support the $18.4 billion proposal as a bare minimum,” Pulham said.

“The increase of funding for commercial crew programs from $696 million in FY14 to $848 million in FY15 could not come at a better time,” Pulham said. “Soyuz prices are set to increase yet again, and our dependence upon Russia for key space capabilities is certain to be scrutinized in view of world events.”

“All International Space Station budget lines would be fully funded,” said Pulham, “which is important to sustaining ISS operations to 2024.”

The administration has proposed a slight decrease in funding for the SLS and Orion programs, from $3.1 billion in FY14 to $2.8 billion in FY15 – $2.9 billion when Opportunity, Growth and Security Initiative funds are considered.