September Space Activity on the Hill 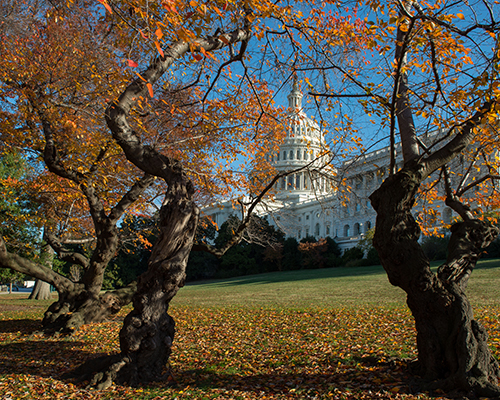 Congress returned on Sept. 9 after a month-long August recess. Last week, the Senate focused on appropriations markups and a nomination hearing for Secretary of Air Force and Army. There is increasing pressure as Congress attempts to pass the bill and prevent a government shutdown by Sept. 30. Although another lengthy government shutdown is unlikely, there is much discussion about how the House and Senate would resolve conflicts in their appropriations.

• On Tuesday, the Senate Defense Subcommittee (SAC-D) met to discuss the Department of Defense Appropriations Act for FY2020 in preparation for Thursday’s Appropriations hearing.
• In his statement, Chairman Richard Shelby sees the Act as a “strong, bipartisan bill” which improves readiness, innovation investment, and bolsters combat effectiveness of the Defense Department.
• SAC-D advanced the FY2020 $1.2 billion funding request for the National Security Space Launch program.

• On Sept. 11, the Space Foundation sponsored an event with AAIA for the House Science, Space and Technology Committee to hold a panel comprised of Mike French (Aerospace Industries Association), Cindy Martin-Brennan (ISS National Lab), and Jared Stout (Venable LLP), moderated by Vincent Boles (IAC Local Organizing Committee) on prioritizing commercialization and industrialization activities in Low Earth Orbit.
• Mike French emphasized the importance of maintaining human presence in orbit and potential areas for Congress to engage with NASA such as tourism, satellite assembly, and microgravity research.
• Martin-Brennan drew a focus on industrial medicine as an area to commercialize and communicated the need to move ISS research to the next stage of production and sales.
• Stout shared the need for a Congress-led national microgravity strategy, similar to the COMPETES ACT. He urged for space legislation that would reduce barriers of entry into the industry and to support robotic platforms.
• Most questions were on the status of the International Space Station (ISS) extension, other countries’ involvement in microgravity research and the profitability of such research. The panelists see a coherent LEO strategy as beneficial to securing the United States’ space leadership. The briefing expands on NASA’s LEO commercialization strategy released in June 2019.

• SASC held a hearing on Sept. 12 on President Trump’s nomination of Barbara Barrett for Secretary of the Air Force. Senator Martha McSally (R-AZ) spoke on Barrett’s strong qualifications and expressed her confidence in the nomination.
• In her opening statement, Barrett endorsed the creation of Space Force as a “key imperative.” Her opening statement outlined the use of space in our everyday lives and emphasized the need for American leadership and resilience in space.
• During the Q&A session of the hearing, Chairman Jim Inhofe (R-OK) and Senator Tim Kaine (D-VA) asked Barrett about Chinese space developments, implementation of funding from the National Defense Authorization Act, international cooperation, and the national security space launch acquisition.
• In her answers, Barrett agreed that effective space launch is crucial for American access to space as Chairman Inhofe expressed his concern about Chinese space launch developments.
• Barrett also shared her concern with Sen. Kaine over other countries’ actions in space which can affect vulnerable strategic assets.

• While the Senate Armed Services Committee was holding a hearing for the next Secretary of the Air Force, the Senate Appropriations Committee held a hearing and approved the FY2020 Defense Appropriations Act by a vote of 16-15.
• In a summary released by the Committee, the Bill supports a budget request for Operation and Maintenance of the Space Force, adding “$108 million for Hypersonic and Ballistic Tracking Space Sensor.”
• The Bill also “fully funds the $1.2 billion National Security Space Launch” request and includes a provision to “protect Air Force launch development and launch services procurement.”
• Click to read Chairman Richard Shelby’s statement and additional summary of the hearing.
• Moving forward, the Senate will have to pass the bill and enter discussions with the House to reach a compromise.

Congressional Briefing: “GPS: The Role of Precision Agriculture in Feeding the World”

• In the afternoon, the GPS caucus held a briefing discussing the impacts of high-precision GPS on the agriculture sector for more efficient farming.
• The speakers were Senator Joni Ernst (R-IA), Brendan Carr (FCC Commissioner), Bill Beam (Department of Agriculture), Dr. Katie Wedel (Iowa Select Farms), and John Rauber (Deere & Company).
• The panelists discussed the evolution of agriculture and how technology integration expanded from tractor to spray and harvest system, which has significantly reduced cost, enabled farmers to identify zones on their land with the most yields, and allowed more effective fleet management.
• The Q&A session was on policy issues including spectrum and broadband limitations, implementation of wireless communication in the field, and the role of AI in tracking and identification.