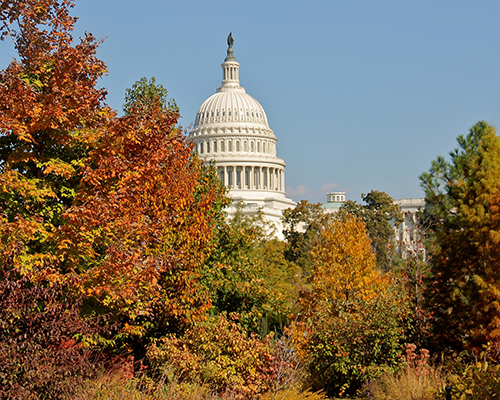 The week of Sept. 19, the Artemis program was criticized in several House oversight hearings. On Sept. 23, NASA signed a contract with Lockheed Martin for six to 12 Orion spacecraft to be built at Johnson Space Center in Texas. Previously, NASA’s decision to award Alabama’s Marshall Spaceflight Center the leading role in the human lunar lander solicitation drew scrutiny from members of the Texas congressional delegation.

This week, FCC Commissioner Michael O’ Rielly voiced his support for the C-Band Alliance, praising the Alliance’s “speedy solution” since a “public auction is a tedious process.” The Commissioner further called for an additional “300 megahertz for cellular 5G services.”

This week, the Senate confirmed Ryan McCarthy as the new Army Secretary on Thursday, Sept. 26. On the same day, the Senate also confirmed Gen. John Hyten, USAF, as vice chairman of the Joint Chiefs of Staffs.

Although the Senate Armed Services Committee advanced Barbara Barrett’s nomination to the floor as Air Force Secretary, her confirmation was temporarily blocked by Senator Richard Blumenthal (D-CT) due to concerns about government spending at Trump-owned properties. However, Barrett’s confirmation vote is expected swiftly after the Senate returns in October. Barrett’s confirmation will start the Air Force’s official decision-making process about where the the new Space Command will be headquartered. The contestants are Buckley AFB, Vandenberg AFB, Peterson AFB, Cheyenne Mountain AFB, Redstone Arsenal, and Schriever AFB.

Also on Sept. 26, the Senate Appropriations Committee advanced to the Senate a $22.75 billion request of NASA funding by a vote of 31-0.

House Science Committee met to discuss the progress of SLS, Orion and EGS as well as the drivers of cost growth and schedule challenges. The witnesses for the hearing were Kenneth Bowersox, Cristina Chaplain, and Doug Cooke. Bowersox is the acting associate administrator after Administrator Bridenstine dismissed Bill Gersteinmaier.

Both Rep. Horn (D-OK) and Rep. Johnson (D-TX) questioned NASA’s dismissal of Gersteinmaier without having a replacement ready.

According to the charter, over 3,800 suppliers and 60,000 workers across all 50 states support SLS, Orion, and EGS programs.

The bill was introduced as an effort to increase the number of STEM graduates entering the workforce to reflect the “diversity of the nation.”

Rep. Waltz mentioned that “minorities make up 27% of the U.S. population but “only [account] for 11% of the STEM workforce” and urged to build on STEM workforce in “places with high-tech jobs like Florida’s Space Triangle.”

The Appropriations Committee, Subcommittee on Commerce, Justice, Science and Related Agencies held a hearing on the CJS bill which discusses funding for space exploration, scientific research, and many other government activities.

According to Chairman Moran’s statement, the bill funds NOAA at $5.3 billion and NASA at $22.75 billion

In his statement, Chairman Moran also discussed Artemis’ role in securing America’s leadership in human space exploration, and that the funding will help NASA achieve its Moon goal in 2024.

The Space Foundation partnered with GPS Innovation Alliance and CompTIA’s Space Enterprise Council to host a panel discussion on how space technologies have helped various industries in the United States with attendance from key industry leaders and congressional staffers from both the House and Senate.

Sambrano outlined how satellite communications drastically changed the aviation industry in terms of comfort and safety for pilots and passengers. Hay discussed GPS’s role in road safety, and Mr. Mehta emphasized NOAA’s use of satellites for national security and weather forecasting.

The Appropriations Committee voted in support of the commerce, justice and science (CJS) spending bill to move forward to the Senate. The Committee approved $22.75 billion for NASA.

The Committee’s report called the amended budget “an ambitious plan for NASA” regarding Artemis 2024 objectives.

After the full Senate discusses the bill, both the House and Senate will attempt to settle differences in defense spending. Sen. Shelby expressed his concern that a year-long CR is “not the outcome lots of us are hoping for.”

The Senate also passed a continuing resolution (CR) that was passed in the House last week, dodging a government shutdown. NASA Administrator Bridenstine has previously suggested without any anomaly or budget amendment in the CR would prevent the start of lunar lander program.

President Trump needs to sign the CR by Sept. 30.

STEM Opportunities Act of 2019 (H.R. 2528) listed for consideration under suspension in House

The House listed the bill for possible consideration under suspension of the rules this week.

The House Science Committee met to discuss the causes and state of forecasting extreme weather events. In her statement, Chairwoman Eddie Bernice Johnson (D-TX) reiterated the need to “better integrate the social and behavioral sciences in our weather enterprise” since “our biases can impact the forecasting process… and how the public interprets forecasts.”

In his statement, Ranking Member Frank Lucas (R-OK) highlights Oklahoma’s National Weather Center activities, asking the Committee to look “to the Oklahoma Mesonet as a model” in improving forecast and communication.

Dr. Bostrom discussed how people have “failed to forestall catastrophic damages” as “people tend to be more prepared for an event when they have prior experience of it” and requested for scientific leadership and capacity building. Dr. Sobel urged for federal science agencies to invest in “open-sourced tools to assess changing extreme weather risk … available for the insurance industry and the private sector … to inform cost-benefit calculations … to increase resilience.” Dr. Done emphasized “a deeper integration of science and practice is urgently needed … [for] military readiness and sustain economic competitiveness.”

In the evening, the Space Foundation attended a panel by Secure World Foundation and the State Department that discussed the impacts of space weather and potential collaboration efforts in modeling and prediction.

Gen. John Raymond, commander of U.S. Space Command, spoke at an AFA breakfast in Washington, D.C.  Gen. Raymond reviewed work completed throughout the past 16 months since the creation of Space Command was announced.

Gen. Raymond spoke about the importance of “pivoting to space,” noting that the National Defense Strategy (NDS) requires such a pivot because of U.S. reliance on space assets. He emphasized that “we are not doing space for space’s sake.”

A major change in space posture over the past few years has been the integration of the Five-Eyes and other international partners into space warfighting plans and preparations. The “Joint Space Operations Center” was renamed the “Combined Space Operations Center” to reflect the international nature of its composition. International Five-Eyes partners now support Operation Olympic Defender, a U.S.-led space deterrence coalition. The U.S. is increasing use of hosted payloads, including a hosted payload arrangement with Norway, and an SSA sensor on a Japanese Satellite.

Gen. Raymond mentioned the success of the Air Chiefs Conference at the Space Foundation’s Space Symposium and noted they are planning a follow-up next year. Additionally, international partners, including Japan, have been invited to the Schriever Wargame.

While U.S. Space Command builds upon the heritage of its previous incarnation (1985–2001), this is “a different command built for a different time.” The modern U.S. Space Command is a geographic combatant command, not a functional COCOM, and has an area of responsibility beginning at 100km above mean sea level. Gen Raymond noted that Space Command will have a closer integration with the IC, including having operational control of NRO assets during times of conflict.

• The Canadian Embassy will be hosting a reception in support of the Space Foundation’s annual International Student Art Contest.

• The Space Foundation will be participating at IAC 2019.

« Free Admission to the Space Foundation Discovery Center this Saturday