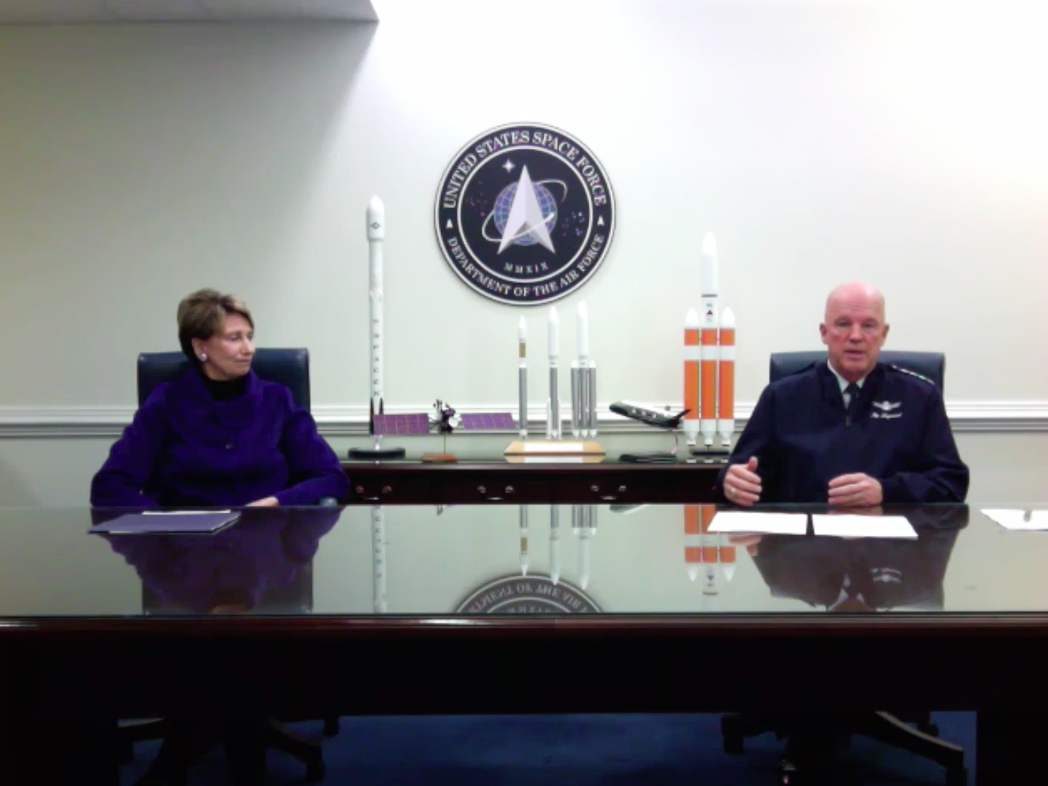 A free video of the webinar can be viewed here.

The event opened with remarks from Space Foundation CEO Tom Zelibor, Rear Admiral, USN (Ret.), in which Zelibor set the tone by stating, “Space is a critical infrastructure that every citizen, community, and country is connected to and dependent on.” Indeed, with a global marketplace worth $415 billion and more than 80 nations operating there, space is no longer the exclusively accessed and benevolent realm it once was, but according to Zelibor has become, “a mission-critical domain with extraordinary national security implications for the United States.”

The webinar then unveiled the debut broadcast of the Space Force’s first recruitment video, which makes the stirring suggestion, “Maybe your purpose on this planet … isn’t on this planet.”

Sec. Barrett initiated the discussion with the announcement that the, “previously cloaked in secrecy,” X-37B spacecraft’s upcoming sixth mission (OTV6) will be launching to low Earth orbit on May 16. She also revealed that the Department of the Air Force has submitted a dedicated space budget for the first time in history to support the development of “transformational systems.”

Gen. Raymond then followed, urging everyday Americans to realize how reliant their lives have become on space assets, discussing the importance of creating the new branch, and explaining why the United States has elevated space missions, “to a level commensurate with its importance to our national security.”

Gen. Raymond then touched on the United States’ critical relationships with international allies in these defense efforts, and in citing recent threatening acts committed against U.S. assets in space by nations like Russia and Iran, Raymond assured that, “We are competing, and deterring, and winning today … and we will be in the future.”

In the Q&A portion of the webinar, moderated by Space Foundation VP-Washington Strategic Operations Thomas Dorame, Sec. Barrett and Gen. Raymond responded to questions from the webinar audience covering topics such as:

As Zelibor commented in his remarks, “It is not every day that you get to stand up a new branch of the military. It is truly one of those rare occasions in history where you are able to set the foundation of what will be a transformational organization.” Echoing that statement, the Space Foundation feels truly honored to have had the opportunity to host this informative discussion.